No, I haven't tried setting up some sweet young thing in a flower shop. I don't even care much for flowers -- as Long Suffering Spouse would tell you without hesitation -- "They'll do me no good when I'm dead," she'll say as another Hallmark holiday goes by without a floral offering.

On the other hand, if I started bringing my wife flowers at this late date, she'd probably start to wonder whether I had taken up with some floozy at the florist's.

Actually, it all started a week ago last night when Long Suffering Spouse and I moved Younger Daughter out of her dorm.

Among the items to be moved was a 27-inch flat screen TV.

Flat-screens aren't that heavy; I'd probably have needed a derrick and a crane to move a 27-inch cathode ray tube model, but I could easily lift this little flat thing, especially when it was neatly boxed up for transport.

I just couldn't see very well around it. It's kind of an awkward size. And I probably shouldn't wear my glasses except when I drive or watch a ballgame at the park or sit too far from the computer screen. I need the glasses for distance. Longer distances, that is, than from the bridge of my nose to the bottom of my feet.

My wife gave me the TV set to carry and a warning besides. "This was a gift," she reminded me, "and we can't afford to replace it. Don't drop it."

Duly instructed, I got my load safely down the hall and down all but one of the flight of steps that stood between me and the van.

Well, I told you I was wearing my glasses and the box was an awkward size -- and somehow I missed or forgot or didn't quite make that last step and I toppled over like an overweight tree.

But -- and my little pea brain was working much faster than I can type this -- I realized that I could not allow the TV to fall with me. I could not drop the screen and I certainly could not fall on it. Even as I was falling, I raised the TV box aloft, like a cue card, as I twisted into a very balletic slide on my right knee across the indoor-outdoor carpeting of the dorm entryway. I ripped my jeans, of course, and started bleeding immediately. But it was a wide cut, not a deep one, so I didn't bleed a lot. (Either that, or I'm stingy even there.)

I used to get injuries like this when I was 10 and would fall off my bike -- skidding on a patch of gravel or something. Even with the necessity of picking out the gravel and the dirt, the injury would heal within a couple of days.

Twenty or twenty five years later, though, when I slipped on a patch of ice at a parking garage and bounced down the stairs on my butt (dignity, always dignity!) I ached for months. Somebody told me that, after 30, no injury heals completely. 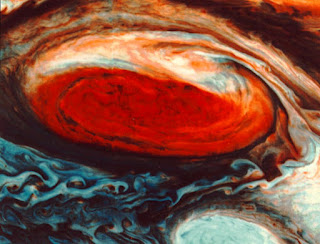 Now, with another couple of decades under my belt, I'm beginning to wonder if new injuries will ever heal, even a little. My knee still hurts this morning. Though I've babied it with topical antibiotics and kept the wound operating-room clean, it's still an angry red around the edges and a sickly green in the middle. The colors aren't exactly right, but it sort of looks like somebody painted the Great Red Spot of Jupiter on my knee.

awww too bad! but i am so glad the tv is okay.

...it is so wrong how hard that made me laugh..."I wish I could have seen that last step more" - priceless!

Well done saving the TV. I hope Longsuffering was appreciative of the above and beyond measures. :P

(Also, this is SO like something I would do.)