Context is everything: What you don't see when you look only at a single picture 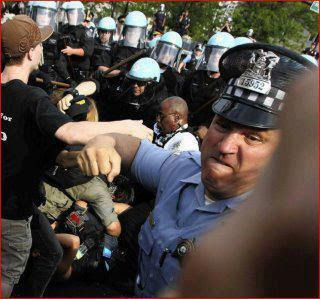 This image has been widely shown this weekend, seemingly showing an enraged Chicago Police officer lashing out at a demonstrator during the recent NATO Summit.

The protestors and their friends want you to believe that this proves that the police were violent, that they overreacted, that they beat up poor, helpless kids just trying to make the world more peaceful.

I've tried (without success) to figure out how to post the Tribune video here this morning that explains what really led up to this picture. But here is the link that should take you to the video. It's well worth the couple of minutes it will take to watch.
Posted by The Curmudgeon at 10:50 AM

Email ThisBlogThis!Share to TwitterShare to FacebookShare to Pinterest
Labels: Neighborhood, News and Views, Roadkill -- politics in the middle of the road, TV

oh my they're at it again, don't know what to day!