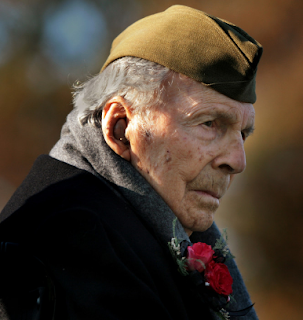 With his passing, World War I becomes strictly a matter of history for Americans. It is no longer an event within "living memory." (Wikipedia says there are two confirmed World War I veterans yet living; both served in the British armed forces, though Claude Choules moved to Australia after the Great War and served under that nation's colors in World War II.) Oh, there are yet some who were alive during the War to End All Wars, but all living memory of going "Over There," the trenches, the mud, the rats, the gas, the thunder of the guns -- all of this is gone now. 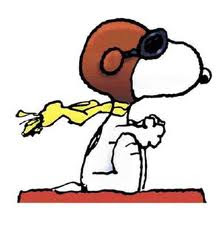 When I was a boy, there were lots of World War I veterans. They were the granddads. When Charles Schultz drew Snoopy as a World War I flying ace, there were a good many newspaper readers who had thrilled to the first accounts of the battles between those Knights of the Air. Some of the real air aces were still around to chuckle at Snoopy's misfortunes right along with the rest of us.

The other night Youngest Son had computer issues: It crashed just after he'd completed a paper and would not restart. My wife volunteered me to get up and sit with him as he called across the world for assistance in bringing the machine back to life. It was the wee small hours of the morning, of course; that's when high school seniors tend to write papers that are due immediately after sunrise. Youngest Son was on hold forever and I flipped on the TV to stay awake. There was a silent comedy on TCM; it was about two doughboys who escape from a German prison camp. It occurred to me that Youngest Son wouldn't have seen German uniforms from World War I; come to think of it, I couldn't remember the last time I had seen any either -- certainly not outside of some program on the History Channel. World War I had once dominated the popular imagination. Then the horrors of World War II crowded World War I from the collective consciousness.

And now World War I becomes a matter for historical study only.

The veterans of the Second World War were the dads of my youth. They are dwindling fast now; the last of these will be go someday, too, like Mr. Buckles, honored and celebrated and revered as the last of his kind.

The last World War II survivor will probably have been a kid who lied about his age to get into uniform, just like Mr. Buckles did. It will probably be that way for the last Korean War veteran, too, or the last veteran of Vietnam.

All the debates over strategy and tactics are glossed over, simplified, or even forgotten, as the generals fade away. The historians decide who was right and who was wrong (and change their minds every generation or so). The last living memories of any war aren't the grand schemes of planners and staff officers, but the vivid impressions made on a teenager's mind, far from home and kin.
Posted by The Curmudgeon at 8:24 AM

Not that the post is bad; but, the last paragraph is wonderful.