What does Yahoo! think I am -- a Republican congressman?

I have a couple of different Yahoo! mail accounts; there's one linked to the Sidebar on this blog.

All of them recently developed the same problem.

Every time I go in to check my mail, a pop-up box will appear on the lower right-hand portion of my screen. Here's one: 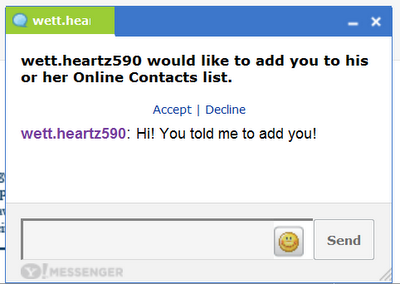 You may not believe this, but I don't know anyone named "Wett.heartz590." I certainly did not ask Mr. or Ms. Heartz (you will note the indistinct gender identification in the solicitation) to add me to his or her contacts list. The same goes for Mr. or Ms. "Warm.potion" something-or-other that also popped up. 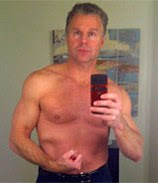 And, frankly, I'm kind of ticked off about the fact that Yahoo! is letting this kind of stuff through. I mean, who do they think I am? Former Republican Congressman Chris Lee?

First of all, the last time I appeared in public without a shirt, Captain Ahab tried to harpoon me.

Anyway, this has happened now 12 or 15 times and I was moved this morning to try and write to Yahoo! to complain.

I clicked around for some time, finding menu upon menu of 'frequently asked questions' but nothing about these unwanted messenger pop-ups. Apparently not too many are asking about Mr. or Ms. Heartz or Potion yet. Or maybe Yahoo! customers are flattered by the solicitations and accept the invitations. Personally, I think these solicitations are invitations to contract a virus -- computer or otherwise.

I'm still trying to figure out how any question becomes "frequently asked" because I could find no address where I could ask anything at all.

Has this happened to any of you?

Anyway, I'm putting my complaint out here in the Greater Blogosphere in the hopes that some Yahoo! spider will see its exclamation points bandied about in this fashion and put an end to the unwelcome solicitations of Mr. or Ms. Heartz and Potion. Or, possibly, introduce them.
Posted by The Curmudgeon at 9:37 AM

Argh! This is a chat invitation - if you go to the 'chat' menu (should be about halfway down on the left on the mail homepage) and set yourself to "invisible," they should stop.

...drove me 3/4 crazy before I figured that out...who the heck is FancyPants200009, and why does s/he think I have time to chat about quality Canadian drug products?!

Addendum: You can also go to your Yahoo profile - not the email, but main profile under Yahoo Pulse - and manage your privacy settings. Uncheck the boxes that say "allow people to find my profile" etc. and it should kill off those robo-friends.

I manage my mother's Yahoo account occasionally and yes, this has been happening every single time I log in to check her mail. It's really annoying.

I'm pretty sure I don't even HAVE a Yahoo! profile... but I'm going to go looking for it now.

It's really irritating, I agree. I don't blame you for complaining. Do let us know how you get on.

Going invisable didn't work for me either. You have to sign out of chat and that should fix the annoying problem. Worked for me!

Anon -- I will try it. I've never used it to begin with -- so I'm not really certain on how I came to be signed in!