Let's be fair. When he donned this costume, maybe the seven-term Oregon Democrat was just trying to attract one of those Chinese tiger mothers who has been so much in the news of late: 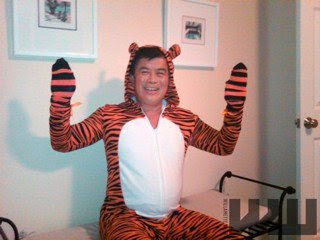 Rep. Wu's is apparently a sad story of mental decline (for background, read this) and I don't mean to pile on.

Still, I couldn't help but think that Mr. Wu's increasingly well-documented problems weren't entirely new. There was something about him that triggered my increasingly feeble memory.

Then, today, I remembered this March 2007 post about a Finnish parliamentarian who had gone to the trouble of translating his campaign web site into Klingon.

In putting that post together, I came across a YouTube video of an American Congressman complaining of American policy in Iraq and warning of "Klingons in the White House." That video is no longer available. But this one was, at least as of this lunch hour:

Now, whether I agree or disagree with the point Congressman Wu was trying to make is immaterial. His little speech here makes reference to both Vulcans and Klingons. That's weird... but not really crazy. The crazy part is that his argument can be understood only by old geeks like me who've watched Star Trek lo these many decades. I kind of doubt there's that many of us... are there?
Posted by The Curmudgeon at 12:36 PM

Email ThisBlogThis!Share to TwitterShare to FacebookShare to Pinterest
Labels: Decline and Fall of Western Civilization