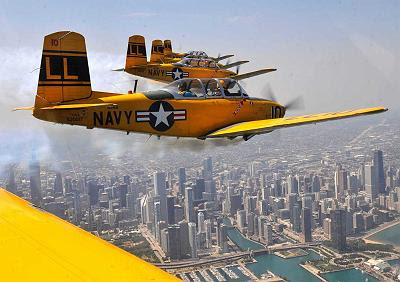 It's just the rehearsal for the annual Chicago Air & Water Show.

The show is actually tomorrow and Sunday, but office workers in Chicago's Loop and Near North Sides will be hearing the pilots' rehearsals all day long today.

It can be quite disconcerting.

When I had an office in the River North area, in an older building, the windows would rattle as the Thunderbirds or the Blue Angels (they take turns coming to Chicago) buzzed Oak Street Beach looking at the sunbathers. At least, that's what I guessed they were doing -- the pilots are no longer exclusively male, but men are certainly well represented in that population.

I usually tried to take this day off because it was hard to concentrate with jets whooshing and swooshing at unusually low altitudes.

Since I've moved to the Undisclosed Location, the Air & Water Show hasn't been that much of a distraction. I have an interior office in the middle of the building. And the planes aren't flying as close to this building as to my old one. Also, I have the 'el' tracks below me and I have become accustomed to that near-constant racket.

But it might be kind of fun to mess with someone newly arrived from the suburbs today -- someone just here to shop, for example. You could go out at lunchtime and, then, when a plane buzzes too near, put your hands over your head and start screaming, "Oh no! We're being attacked!

Of course, if your victim sees the Red Bull Upside Down Helicopter instead of an F-16, your little deception might backfire.

I'd consider doing this myself... but it's just too hot to go outside unnecessarily.
Posted by The Curmudgeon at 9:20 AM

Yeah... I think the helicopter might ruin your plan. ;)