We've been rehashing my daughter's wedding this week here at Second Effort, and I've told a few long-winded stories already, and I hope to spin a few more before (a) the topic is exhausted or (b) Oldest Son gets married next year, but for today I just want to focus on one scrap of conversation I picked up while hopping from table to table at the reception.

The conversation at this table had turned to the upcoming 40th anniversary of the Moon landing. My friend Steve observed that, if the opportunity presented itself, his 80-something father-in-law would climb on board a rocket in a minute. Steve's wife agreed, adding that she still resents being dragged into the den for every mission launch when she was a kid. "I can't stand to watch that stuff even today," she added with some emphasis.

I hadn't thought of this. President Kennedy inspired a whole generation of men and women to reach for the stars -- and some of these men and women turned their kids off to space forever by 'forcing' them to watch it on TV. Some of those one-time kids are running the country today. 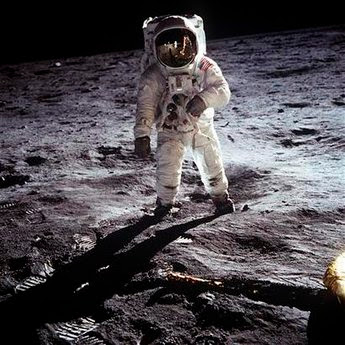 I suppose it's human nature. People like to decide things for themselves. And kids in particular are not always inclined to share their parents' views. In fact, like Steve's wife, a lot of young people tend to rebel against things their parents think important.

It's long past time to inspire a new generation. Mr. Obama has his hands full, of course, with the recession and other matters. He's been trying to "stimulate" the economy back into smooth operation with costly public works programs. But these tend to be highway projects or other infrastructure projects -- too long deferred, perhaps, but subject to criticism because they don't move us forward toward new, more energy-efficient modes of transportation or other, greener technologies.

And there's even some argument, among Mr. Obama's own supporters, as to whether the stimulus has worked. One of his long-time boosters, a Mr. Buffett of Omaha, Nebraska (you may have heard of him), has suggested that, in fact, a second stimulus package may be necessary.

I have just the thing. Mr. Obama can announce that we are going to colonize the Moon -- and land an expedition on Mars. He can even paraphrase President Kennedy's September 12, 1962 speech at Rice University in his announcement:

We choose to go to Mars before the end of the next decade and do the other things, like colonizing the Moon, not because they are easy, but because they are hard, because that goal will serve to organize and measure the best of our energies and skills, because that challenge is one that we are willing to accept, one we are unwilling to postpone, and one which we intend to win, and the others, too...Many years ago the great British explorer George Mallory, who was to die on Mount Everest, was asked why did he want to climb it. He said, "Because it is there." Well, space is there, and we're going to climb it, and the moon and the planets are there, and new hopes for knowledge and peace are there. And, therefore, as we set sail we ask God's blessing on the most hazardous and dangerous and greatest adventure on which man has ever embarked.

to me space exploration is like the wild west or columbus. exciting and adventurous. i cannot imagine not watching! we saw the liftoff from our balcony this week and it still takes my breath away!

to me space exploration is like the wild west or columbus. exciting and adventurous. i cannot imagine not watching! we saw the liftoff from our balcony this week and it still takes my breath away!

There's a lot of moon stuff out right now.