Curmudgeon flies around the country but not off the handle

I don’t know why anyone voluntarily takes a scheduled commercial flight in the United States.

I had the privilege of traveling to South Florida on Wednesday, arriving at O’Hare in a pre-dawn rain shower for a flight to Ft. Lauderdale. From Ft. Lauderdale I would rent a car and drive up to West Palm Beach. I realize that there is an airport there, too, but, after consulting schedule after website schedule, it was obvious that I could not get into that airport directly and back to Chicago in a single day.

Part of the problem was the timing of the deposition: The witness insisted on a late afternoon start.

But the day started out well enough – if you don’t count my spilling coffee all over myself in the car on the way to the airport. It was a beige shirt to begin with – but entirely inadequate to cover the evidence of my sloppiness.

Anyone still harboring the notion that air travel is romantic or glamorous has been in a coma since 2001. Today air travel is a joyless shuffle from one line to the next. One can prepare for it to some extent – I put my driver’s license in a shirt pocket this morning; I left the house with my shoes untied. But I still had to bring a laptop, and I still had to peel it out of its case. I needed three bins at the airport security check-in – and some time to put myself back together when I had successfully run the gauntlet.

The lines inside the plane are caused by people trying to hoist “carry-on” luggage into the overhead bins. Carry-on luggage seems to consist of giant, lumpy blocks of granite. In theory, these should stack like Lego bricks; in practice, stuffed with who-knows-what, they constitute a hazard to anyone who sits beneath the opening and a hernia-risk to anyone who tries to loft one.

Flight attendants must be among the strongest people, pound for pound, because they are so often called upon to assist in lifting and rearranging these “carry-on” bags.

No one actually puts their carry-on by their seat. No matter where you actually sit on a plane, the bin above you is full when you arrive. I’m always in the last group to board, so I can’t prove it, but I believe this must hold true even for the first ones on the plane. You’d think the airlines would be suspicious of carry-ons that are never carried off.

But shed no tears for the airline industry. I’d thought they were in dire peril before the economy crashed – but, yesterday, I rode on two planes that were filled entirely. My third flight late last night, home to Chicago, wasn’t entirely full, but it was nearly so. Years ago, I’d been on flights where I had the row to myself; this apparently doesn’t happen anymore.

And while lines are cheerless, joyless things that must be endured, the people in them are not always sour or mean. Even the TSA agents I encountered yesterday were polite and not overly officious. Straggling out of my flight from Ft. Lauderdale, trying to find my gate in Charlotte for the Chicago leg of my journey, I asked a U.S. Air employee for help. He wasn’t actually working that counter, he told me, and I apologized for bothering him – and began to walk away. He stopped me. He could sign into the system, he told me, and he stepped behind the counter and did so. In a minute he’d given me my location. This was unexpected courtesy.

Thus, I perceived a certain we’re-all-in-this-together spirit of shared suffering in air travel. But I still want someone to blame. Especially for sticking me in the middle seat on two of three flights.

Still, no matter how cramped I was, there was still an opportunity to learn. Yesterday, I learned where Dave Barry finds his annual Christmas gift lists. Let me explain. In the middle seat, I couldn’t reach my computer; I couldn’t reach my briefcase. After I finished the morning paper, I had no choice but to spend a happy hour or so with the Sky Mall catalog.

There were audio and video accessories aplenty. There are now as many add-ons for iPods and iPhones as there are uses for duct tape. There were a surprising number of spy devices: Cameras to monitor your home from the road. GPS devices you can conceal in your car and track the location of your child (or spouse) even while traveling. And there was a hat that supposedly repels insects (a bargain at $79.95) and a “travel adapter” useable in 150 countries (for only $34.95!).

But what really caught my eye was a full size suit of armor – perfect for the house – but probably a bad idea to wear at airport security. I was tempted – until I noticed that the catalog said “No Rush Deliveries.” I wanted it right away... or not at all.

And then there was the collection of garden statuary. I’ve never seen such variety. There were garden fairies and a seated St. Francis – complete with birds perching – but also a two foot tall Yeti. I would think that, if one was going to put a Yeti statue in the backyard, it should at least be seven feet tall. My favorite, though, was “The Zombie of Montclair Moors” Statute. The illustration shows the head, shoulders and arms of an undead gentleman seemingly clawing his way up from his grave. The catalog boasts that this statue is “[c]aptured in meticulous detail in quality designer resin” and “finished so realistically that you’ll swear you can hear him breathing.” And such a bargain: Only $89.95! 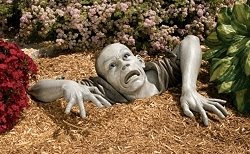 I thought this would make a unique surprise for Long Suffering Spouse – she's the avid gardener in the family -- especially if I planted it in the garden without telling her about it. But I gave up the plan when I saw the dreaded words: “No Rush Deliveries.”

Email ThisBlogThis!Share to TwitterShare to FacebookShare to Pinterest
Labels: Family, Things you never knew -- and never wanted to know either

i could not agree more about the horrors of flying, and add to the mix being a larger person (that was putting it nicely, wasn't it?) and you have one friend that does not do it unless i have to. the last time we flew it was to rome and it took me days to get over it. i was wedged in like a pickle in a jar for 10 hours.

sorry you didn't have any time here though, i would have loved to have taken you to dinner or something and met you curmy.

Oh, Cur I am getting myself psyched for a trip back to US and your post filled me with horrors. I may not be able to avoid the lines, but I will definitely avoid those online catlogs. Just the description of that zombie statue has given me the creeps.

In the dark ages (1970s), I use to look at air travel as and adventure. Now it has become something only to endure, often at great pain. Speaking of the in-flight catalogs, who buys that stuff anyway?