A milestone on the road to overnight sensation?

Whenever a person, place or thing penetrates the public consciousness it is considered, in some sense, an overnight sensation. 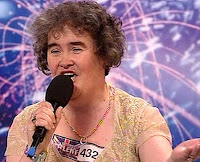 Much as I might hope and dream otherwise, though, big success actually comes in little increments. These increments may build like bricks and create a solid career -- like little cases may, eventually, build a solid law practice. Or the little incremental successes may sometimes build up to a critical mass and suddenly explode. I'm quite certain, for example, that Susan Boyle sang quite beautifully long before she was seen on "Britain's Got Talent" -- and became an 'overnight sensation' on YouTube. There must have been many fits and starts along the way to that breakout moment.

Today, possibly, I have a new little incremental success of my own: An Internet entrepreneur named Jay Harrison, who is running a site called BoomSpeak wrote recently and asked if he could reprint some of my old essays on his site... with attribution and a link and, of course, no money whatsoever.

I said 'yes' -- even after he confessed he would have to edit some of them to fit a 400-word target space. Four hundred words for a lawyer is barely enough to get past the introduction... so I'm curious to see what he can do. The first of what may be several essays culled from Second Effort appears today on the BoomSpeak essays page.

Who knows? Perhaps Mr. Harrison will become the next Internet overnight sensation... and I'll get some spillover traffic. If that happens, maybe I can get him to double what he's paying me... no, wait....
Posted by The Curmudgeon at 8:39 AM