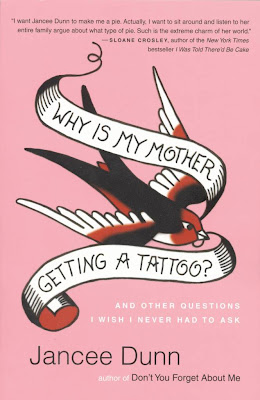 I didn't grow up in the 80s and I will never read even one celebrity health-and-beauty book. I admit, therefore, that I am probably not in the target demographic for Jancee Dunn's very funny, enjoyable new book, Why Is My Mother Getting a Tattoo? In fact, before being asked to read and review the book, I'd never heard of Ms. Dunn.

And, looking at Ms. Dunn's bio, this should have come as no surprise: Dunn was once a veejay on MTV2; I never even watched MTV1. According to Wikipedia, Ms. Dunn was a writer for Rolling Stone between 1989 and 2003. I haven't picked up a copy of Rolling Stone since around the time that Dr. Hook & The Medicine Show were making a musical pitch to be on the cover.

Dunn has also written for GQ. Insert your own obvious joke here.

Tattoo is mostly a collection of essays about Dunn's very close, loving family and, in particular, about the growing realization that her parents will at some point no longer be available to provide the clan's focal point. But that makes the book sound syrupy... or sad. It is neither. These are just good-natured stories told by a good storyteller. I suppose you could liken Tattoo to a collection of long-form blog posts, posts that you can take to read on the bus or the train going home without a wireless network card. At least one chapter, "His 'n' Hers Tiger-Print Underwear in Soft, Shape-Retaining Fabric," appears to have grown out of a 2007 post on Jancee's blog.

As an anonymous blogger worried that my occasional stories about friends and family might offend, I found it fascinating that Jancee's family and friends were so willing to have their lives opened up to public scrutiny. Enlisting the aid of Ms. Dunn's publicist, I inquired as to how Jancee secured their cooperation.

The author responded, by email, that she's "gradually worn them down." Her first book, But Enough About Me: A Jersey Girl's Unlikely Adventures Among the Absurdly Famous, was a memoir, she told me, and her parents "balked a lot more" while she was writing that one. When that book appeared, Dunn said, her parents found "that they sort of like the attention."

Dunn said her parents "haven't had to draw too many boundaries because I respect them too much to delve into any serious dirty laundry. Not that I'm hiding much. My father really was a boy scout, a church acolyte, a crossing guard, his high school's designated driver. I simply don't have any decently sleazy material. In fact when I wrote the memoir, I fretted that I didn't have a dysfunctional family."

The respect that Dunn has for her family, and particularly for her parents, comes through loud and clear in Tattoo.

But I was still not satisfied. I wanted to know how Jancee's parents would answer the question of why they've agreed to have their lives opened up in this way. Ms. Dunn agreed to ask.

Jancee's mother, as you'll learn in Tattoo, is a former beauty queen. She may be the mother of three Jersey girls, but she has retained her own Southern roots. Jancee's father is a long-time employee of J.C. Penney, now retired. When he and Jancee's mother decided to sell the home in which they raised their children, he thought it would be a good idea to make a video farewell tour of the place. Unfortunately, so far as his children were concerned, he didn't take the video until everything was moved out. He couldn't understand why the kids thought that was a bad idea.

Jancee relayed her parents' answers to my inquiry. Jancee's mother's response was very nice, but her father's was pitch perfect. See for yourself:

Mom: It wasn't hard at all to persuade her not to include things I didn't want in the book, because we don't talk about really, really personal problems outside the family. In which case, we just said "Jancee, this is off the record." But it really doesn't matter what else she writes about, because our life is kind of an open book anyhow. And we get a kick out of reading her stuff.

Dad: I just tell her not to say anything. I am the father, you know.

Though I was not familiar with Dunn before reading Why Is My Mother Getting a Tattoo? I feel like I know Jancee and her whole family now.

And thus we see another benefit of anonymous blogging: The Dunn family can't quite figure out, yet, what name to put on the restraining order.

Why Is My Mother Getting a Tattoo? is available today online and in bookstores.

I love books like this. David Sedaris writes very funny stories about his family, as does Laurie Notaro.

I used to get books to review, but they kept sending me books that really didn't relate to me or I didn't like them, so they stopped.

A good review on this book. They cwertainly open up their lives to all readers.