In today's Heads or Tails, blogging's own midsummer night's dream, Barb, asks us to recount a specific summer memory.

Back when I was single, there was a great party I went to one summer on the Michigan side of Lake Michigan... and a beautiful beach... and a very friendly young lady.... Of course, my account of those memories might be inappropriate for younger or more sensitive readers -- and you wouldn't believe me anyway.

Barb picked this topic last year as well. Last year I wrote about an incident that occurred when I was working as a laborer after my first year of law school. Today, I'll revisit that same job.

You wouldn't know it from my paunchy appearance these days, but as a 21-year old law student I was skinny as a rail. I looked as much like a praying mantis with sideburns and bags under my eyes as anything else.

That's why I thought it funny when my father told me he'd set me up for a summer job with a general contractor that he knew. The contractor was building a subdivision within easy biking distance of my parents' home out where Christ lost His shoes.

The contractor was a dark, Italian-American man about 5'6" and built like a barrel. "Kid, we're going to turn you into coiled steel this summer," he told me. "Coiled steel." He had trouble saying that with a straight face -- and I sure couldn't blame him. 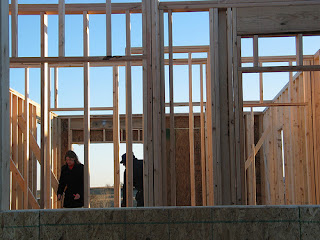 I may have seen the actual contractor twice more that entire summer. The guy I reported to every day was the foreman. I'll call him Burt.

Burt wasn't tall either, but he was thin and sandy-haired and he spoke with a twang that betrayed a Southern origin. I'm not saying he was from Georgia -- in Illinois, anyone born South of I-80 might have a Southern twang. Burt was the public face of the project; when home buyers came to see how their new homes were coming along, Burt was the man they came to see.

This was a small subdivision. No homes were built on spec; each new house was under contract before ground was broken.

I was one of three laborers on the site; the others were Mexicans. Whatever time I got there in the morning -- and it was early -- the two Mexicans were there before me. They kept working after I was free to go. I eventually learned that they were sleeping on the site. Looking back, I guess they must have been illegals. At the time all I knew was that they worked longer and harder on their worst day than I could on my best.

Most of the work I did involved sweeping here or toting supplies there.

One of my regular duties involved pumping basements. Before each new house was enclosed, its basement would fill with water whenever it rained. Depending on where the water table was, the basement might have filled with water anyway. This is why sump pumps were invented.

And it was a sump pump I was using, hooked up to a gasoline powered generator. Unfortunately I couldn't just drop the hose in and walk away. I had to jump into the basements and direct the hose, because otherwise it would promptly be clogged with debris.

The tradesmen used the basements for dumping whatever they needed to dump. Sometimes it was scraps of wood or shingles. Sometimes it was other things. I had to stand in the muck and mire and keep the business end of the hose from becoming clogged.

This would be bad enough, but occasionally, in the afternoons, after drinking several beers at lunch, the bricklayers would be overcome by a predictable need. This was something else that would be put into the basement... whether I was there or not. Sometimes I think they were aiming for me. Maybe it was a contest. I was not about to inquire.

The bricklayers weren't the only tradesmen to drink at lunch. I accepted the plumber's invitation to lunch one day. He drove us to a joint off the site. I let him buy me a beer... but I wasn't going to let him buy me two. Something in his manner or tone... well, I was glad to get back to work. Even with the bricklayers.

Another time I brought insulation to the carpenters. The youngest of them asked me if I was from the area. Yes, I said. He asked if I had gone to the local high school. Yes, I said. "How many years?" he asked.

"Oh," he said. "College boy." His voice carried something of a sneer. I certainly did not volunteer that I had by then already graduated college.

Burt certainly didn't need a "college boy" to fetch insulation or pump basements. But I had a vital function in the continued smooth operation of the development.

You'll remember I mentioned that ground was not broken for a house unless it was under contract? The new home buyers -- young couples, maybe with a kid or two -- generally moving up from an apartment or condo -- didn't realize that the scheduled completion date that was in the sales documents was not as firm as it had seemed to be on paper.

So people lost their leases. They were reduced to living with one of their parents. Or in their cars. With their furniture in increasingly expensive storage. And they were angry, angry young couples that came to confront ol' Burt every couple of days. I don't recall seeing any of them carrying ropes or torches or pitchforks... but they had the attitude of persons who might carry such things as they stalked around the site looking for Burt.

And it was here that I earned my keep.

Ol' Burt would weather their initial blasts as best he could. Sooner or later, he reasoned, they'd have to stop just in order to breathe.

That's when Burt would motion me over.

"Bill, Sally," he'd twang, just as if they'd been discussing baseball and not threatening to tear him limb from limb, "have you met our young Curmudgeon? C'mon over here, Curmudgeon, and meet Bill and Sally."

Then Burt would turn back to Bill and Sally and tell them, in a conversational, even conspiratorial, tone, "Curmudgeon here is a college boy. He's going to law school." Then he'd turn toward me -- and I'd better be there -- "Aren't you, Curmudgeon?"

My job at this point was to have my hand extended. Yes, Burt would direct me, shake hands with Bill and Sally (or Ted and Jane or Ed and Edna; this happened more than once). These same people, who moments ago had blood in their eyes and murder in their hearts, would weakly shake my hand. Often we'd engage in some rather forced small talk about school. After all, I wasn't the one they had come to confront.

And so the moment of danger would pass: These angry people weren't hardened killers, they were just frustrated, but fundamentally nice, people who were sick of living in their car. So having exchanged conversational niceties with yours truly, they weren't immediately able to recapture their homicidal rage. Burt could then placate them with promises that the house would be done in just one more week or 10 more days.

Some of them must have driven away wondering what had just happened.

Thirty-some years out I am more convinced than ever that this was my only real value to the project: I was a human lightning rod.
Posted by The Curmudgeon at 6:14 PM

Wow! I would definitely have not been able to handle work like that! I think we all have a little more sympathy for working students. My daughter is putting herself through University right now with the hopes of going to Law School, but her summer job is nothing like you went through. Yikes!

They'd have lost me the first time someone used me for target practice.
For Real!!!

I'm not going to go back and search; but, weren't there some girls involved last summer? And, I don't remember a party in Michigan.

A lightning rod will not work unless it's grounded and you certainly were!

I seem to remember girls in last year's story, too. But it would be boring to repeat the same stories over and over.

These are my favorite posts of yours. Your past is so exciting and interesting. And usually humorous. Just like this one.

Pssst. I repeat the seasonal themes lie this. It gives me a b break from having to come up with new themes. :P

Sooooo, this is how you got the title for your blog then, right? Way cool. And I'm not sure I'd tolerate the fact I was probably target. No sirree! But what a memory. And such a learning experience.

[by the way, I remember when we had a house built to our own plans and I remember getting ready to landscape...near the foundation I dug up all kinds of wood scraps and chunks of concrete!]

My HoT is now posted. Come join me...have a scoop or two!!

Eeew! That is terrible that they peed on you. For shame. So, were you coiled steel by the end of summer?

Did or do you practice law? My son starts law school in August.

well..this was long story...LOL and all I could think is my other half is a contractor and a sub contractor...LOL He has his own remodeling business..not building new homes....however, when we built our house we did it all...and I caught the guys peeing in our basement...totally ticked me off...I almost lost it over that!!!!!!!!!!!
My other half has a way about him to calm the homicidal rage..LOL
It's a hard business to be in...keeping everyone happy is tough. But before owning his own business he was where you were....the human lightning rod. So I feel your pain :-)

I think 'older' people put up with a lot more stuff. My first job was horrible but I managed to last the summer even though I refused to return the following year. Amazing that we put up with that treatment...