They're counting noses now in Springfield 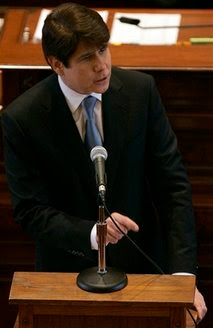 Here's a link to the developing AP story on Yahoo! News about Gov. Blagojevich's closing argument to the Illinois State Senate today; it is from that story that this image was acquired.

I watched the Governor's speech live on an Internet feed. No puppies were brought in, but there were many appeals to sympathy and references to children and old people he was trying to save. The response to the charges was over in under 30 minutes; the balance of his hour-long talk was a variation on a standard stump speech.

At the end, Chief Justice Fitzgerald invited Mr. Blagojevich to remain in the chamber, in the seat that had been set aside for him throughout the trial. The Governor's response was muffled, but it was along the lines of, 'no, that's OK, I don't need to stay. Whatever you do, you do.' Blagojevich left.

The Chief Justice then asked the House Prosecutor, Mr. Evans, to give his rebuttal. But State Senate President John J. Cullerton interrupted. He asked for a recess until 1:00pm CST for a caucus. The Republican leader, Sen. Christine Radogno, concurred; she'd like to caucus her members, too.

Caucus is a polite word for 'making sure we still have the votes.' We'll see if they do.

UPDATE: Herewith a link to the excellent Capitol Fax Blog summary of the Governor's speech.

UPDATE #2: Caucusing again. Here's the link to Mr. Miller's summary on the Capitol Fax Blog of Mr. Ellis' rebuttal. These infernal caucuses are one way in which the impeachment trial differs from a trial in court: Sure, there are interruptions all the time in court, too, but not during and after the closing arguments. As soon as the last lawyer sits, the jury is charged and retires to order lunch. I guess the 'deliberations' of this jury will be in public -- so they're rehearsing now.
Posted by The Curmudgeon at 12:05 PM

Thanks for updating us on this topic.