A defection in the ranks: A colleague moves to Florida

We are soon to lose another member of the Gang of Four that originally leased space here at the Undisclosed Location. The first of our group to depart also departed this earthly plane. Happily, our latest defector is merely moving to Florida. After nearly 40 years practicing law in Illinois, our colleague has taken, and passed, the Florida Bar Exam.

For those who may not know, some states allow lawyers from other states to move in and start up their practices just as if they'd been schooled and licensed there in the first place. This is called "reciprocity." If State One and State Two have reciprocity, lawyers in good standing from State One can move to State Two with minimal regulatory fuss. In fact, we hope they do is the unspoken part of any reciprocity agreement. We've got enough lawyers,er, problems of our own.

But the system of reciprocity breaks down when State Two is in a warm, sunny clime and it's 10 below zero in State One, as it is here in Chicago this morning. Florida does not offer reciprocity for lawyers wishing to relocate. It erects barriers for barristers that are nearly insurmountable. 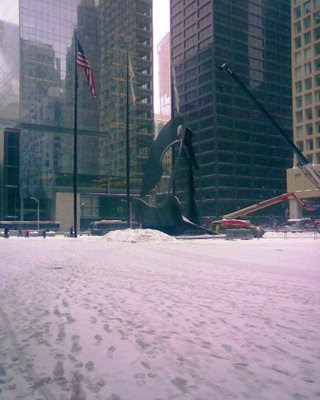 Taken at the Daley Center yesterday while it was snowing vigorously. If I were a better photographer you'd be able to discern flakes. And not just the lawyers, either; I'm talking about precipitation. There's a foot and half of snow on the ground here. It's a Winter Wonderland! Why would anyone want to leave?

Taking the Florida Bar Exam is merely the beginning of the process. In Florida, the Board of Bar Examiners insists on reviewing a lawyer's entire life and career, in numbing detail, before deciding that a relocating lawyer has sufficient character and fitness to practice law in the Sunshine State. The stated reason for this painstaking assessment is that the relocating lawyer may have pulled the wool over the eyes of those charged with protecting the public back in State One; therefore, the people of Florida are well-served by this heightened vigilance. The real reason for this strictest scrutiny is to protect the livelihoods of those already licensed in Florida. You can move here, is the attitude, but why don't you retire already like everyone else? Presumably, some do get discouraged. Our colleague, though, is made of sterner stuff. They've been sifting through his life and career for a year since he's passed the actual bar exam, and still he persists. He believes his application to practice in Florida will be approved any day now. He has great faith.

He came into the office yesterday for the first time this year. (He'd been at his Florida condo since before Christmas.) With him he brought still more snow and the promise of 48 hours or so of sub-zero temperatures. He was polite enough not to gloat -- too much -- about the pending move.
Posted by The Curmudgeon at 9:54 AM

He may be gloating now, but remind him that hurricane season will soon blow into town.

As Steve above said, he'll be asking for a spot in the Undisclosed Location - and possibly your couch - when hurricane season rolls around.
I don't even have escape to the grandparents to fantasize about this year, they stayed in IL due to health complications, instead of the usual routine of Florida from Dec. to April. I'm reduced to reading Bee's blog and weeping quietly...
Shel

curmy that's because there is one (or more) on every corner. but we like them anyway! come on down!

well he sounds like a good persistent lawyer type going after what he wants. tell him congrats.