Sometimes, late at night, I dream about becoming... a Republican.

I've never taken a Republican ballot in a primary election (how I vote in a general election being my business entirely) but... with Rod Blagojevich... the highest sales tax in the nation (courtesy of the Democratic Cook County Board)... increased fees for every kind of service... and all the many corruption cases pending... I can't help but think about switching sides.

Also, there's something attractive about becoming a big fish in a small pond.

There aren't many ponds smaller than the Republican Party in Illinois. Democrats control both houses of our legislature and all statewide elected offices. True, I live in a corner of the City of Chicago where we have a Republican alderman (the one and only in the City Council) and a Republican state representative (the one and only who represents any part of Chicago). Some people think that these guys exist because, at least in our area, people who live here are smart enough to be disgusted and vote against the status quo.

I'm not convinced. I think there are lots of people living elsewhere in the City who are at least as smart as, and maybe a whole lot smarter than, my neighbors.

I think the Environmental Protection Agency has something to do with it. In fact, I think the Republicans would be pleased to have as many Chicago members as there are spotted owls.

And, besides, the Republicans have their troubles, too. And I'm not talking about George Bush. Or even Larry Craig.

In Illinois, Republicans have cozied up with the dominant Democrats in order to get some space at the corruption trough. Republican fundraiser William Cellini is currently under indictment. George Ryan, Blagojevich's predecessor, is still in the slam.

By the way, bet against Blagojevich and Ryan becoming roommates: Gov. Ryan is in a facility that is better suited to handle the needs of elderly prisoners. (Hmmmm. I wonder if there is a federal prison facility that offers 24/7 hair care?)

Republicans and Democrats are currently vying with each other to see who can feign the most shock at Blagojevich's behavior. But that hasn't stopped Democrats from caving in to Blagojevich's appointment of Roland "Tombstone" Burris -- he may not be seated today, but it is only a matter of time now. After Blagojevich's arrest, the overwhelming Democratic majorities in both houses of our state legislature had the opportunity to pass a bill calling for a special election to fill Obama's Senate seat -- but they took a pass, figuring that Governor-in-Waiting Pat Quinn would appoint someone who could lead the Illinois ticket in 2010. Blagojevich crossed them all up by appointing someone who has lost his last four bids for statewide office. 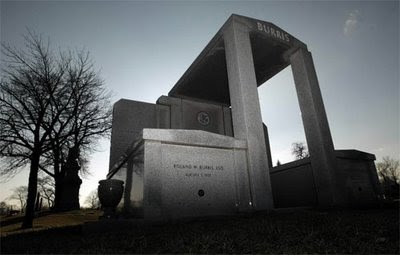 And Mr. Burris has no intention of chiseling only a two year Senate term on his elaborate mausoleum. Other people can talk all they want about him stepping aside 2010; he may even say he agrees to it. But promises of future performance are notoriously unenforceable.

The sort-of-funny thing is that, if Burris sticks to his guns, the very same people who are wringing their hands over his appointment now will unite behind him in 2010. You read it here first. The first rule of politics is get your own guy in office. Failing that, keeping the other guy in office becomes a paramount priority over losing the office to the other party. Remember, every Senate Democrat signed a letter saying they'd never let any Blagojevich in their club. Then someone pointed out that someone like Republican Congressman Mark Kirk might win a special election, if one were called. An about face was duly executed. Of course, the Democrats count on We the People to forget. We usually do.

And it's not as if the Republicans will have anyone to run against Burris in two years. (No congressman would give up his or her seat to make the effort, something that wouldn't have to happen in a special election -- but would have to happen now.)

No, in the harsh light of morning, I figure there's no point in joining the Republicans.

I wonder if I could revive the Whigs?
Posted by The Curmudgeon at 8:13 AM

Email ThisBlogThis!Share to TwitterShare to FacebookShare to Pinterest
Labels: Just for giggles, Roadkill -- politics in the middle of the road

"And it's not as if the Republicans will have anyone to run against Burris in two years. (No congressman would give up his or her seat to make the effort, something that wouldn't have to happen in a special election -- but would have to happen now.)"

Reapportionment will result in Illinois having one less House seat come 2012 so the 2010 Senate race would be a great time for Kirk to make a move. Don’t give up hope yet!

well curmy if you change your mind we'd be proud to have you "change teams" so to speak!

come on over from the dark side....

What about True Republicanism, which is very much unlike the pandering, special-interest-beholden version we have now?
I've revamped my site, Curmudgeon, if you haven't gotten a chance go there to see what I mean (the About page is where you'll find it).
It's not an actual party; between school and work I don't have time to be a political hack, but still...

Ralph would welcome you into the Republican party. And no, it's not the dark side!
I'm unaffiliated.

Blago sure keeps a lot of media types in business...the gift that keeps on giving, that's your governor.