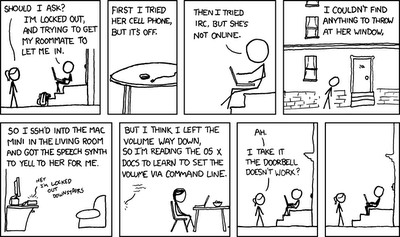 I don't understand half the acronyms in the comic, but I sure do get the joke. And, more, I agree: The more we 'simplify' our lives with new devices, the more complicated things become.

A real-life case in point from Friday night: Long Suffering Spouse was out with Older and Younger Daughters, shopping for wedding and bridesmaid dresses. I was at work. Youngest Son stayed after school for a baseball workout; his plan was to stay after that to watch the sophomore and varsity basketball games. I would pick up the boy thereafter.

If you think he and I were doing our darndest to avoid any interaction with the dress shopping, you'd be absolutely correct.

Long Suffering Spouse knew what we were up to, but as long as I was hiding in my office, with the computer in front of me, she would call periodically with questions about stores or directions. Finally, though, I could hide in my office no longer. I needed to move my base of operations home where I could more readily pick up the boy.

I apparently had left my cell phone on all day.

At the end of a long week, my personal batteries were running pretty low. My cell phone batteries were in full agreement. As I walked to the parking garage, my cell phone rang -- and the low battery alarm beeped as well. It was Youngest Son: It seems the generator at school was also tired at the end of the week. The lights had gone out in the gym. The varsity game would be canceled in five minutes or so if the lights did not come back up. Fine, I said, I would start out in his direction intending to pick him up. I could always divert if the lights came back on -- but, for now, I was heading in his direction. A train was rumbling by on the elevated tracks overhead. He couldn't hear me well; I couldn't hear him well, either. But he got the gist of the message.

I got the car.

I was just about to back out when the phone rang -- and beeped -- again. It was Long Suffering Spouse with a question about the dresses. That question may be taken up in a future essay. To avoid tangling the narrative thread here, suffice it to say that, having addressed that issue, I brought Long Suffering Spouse up to speed about the lights at Youngest Son's school. I advised of my intentions regarding picking up the boy. I advised that my battery was low. I terminated the call.

It takes awhile, even at 7:00pm, especially on a Friday, to get out of the Loop and onto the expressway. At the stoplight at Ontario and Orleans, I dialed Youngest Son. By now, I reckoned, Youngest Son would know if the game had been canceled.

But my phone just beeped and went off. The battery was kaput. No, I don't have a car charger.

But I come from a simpler time, a time when it was not expected that we would be capable of immediate communication with one another at all hours of the day no matter where we were. My logic, I believe, was unassailable. Having promised to start out for school, I would continue on that course. The game was either canceled or it was not. If it was not, Youngest Son would still be there, embarrassed to see me, as all teenagers are embarrassed by any public interaction with their parents. I could always leave and come back later, if the circumstances warranted. If the game was canceled, Youngest Son would be there waiting, with growing impatience, for my arrival.

That's what I thought.

When I arrived at school, having moved with possibly a slight disregard for the posted speed limits, I knew at once the game was canceled. The entire building was dark. In fact, approaching in the dark from a different direction than usual, my first thought was that I had somehow missed the school and was passing a forest preserve.

The parking lot was mostly empty, too, and, once I got oriented, I could see there were cars pulling in and out of the lot with some regularity. I parked my car and walked in. Nope, I noticed, he's not in the lobby.

"Excuse me, sir," said a security guard. "We've had a power failure and the game has been canceled." (The lobby and hallway were lit. Emergency lights, I suppose.)

"I know," I replied, "but my cell phone has also had a power failure so I am forced to search for my son the old-fashioned way."

"Good luck," said the security guard. "There are still some kids by the refreshment stand, I think, helping to close out." Since Youngest Son sometimes helps out there, I thought it was a good place to begin my search. I thanked the nice lady and moved on.

Youngest Son wasn't there. Nor was he at home. He had decided to go to a friend's house. He got someone to drive him.

Reconstructing events afterward, I believe that I was a victim of new assumptions concerning communication. In the modern age, apparently, when someone doesn't answer their cell phone, it means that he is being rude or deliberately evasive: He could answer but simply chooses not to.

This is what Youngest Son figured, at least, when he couldn't reach me, despite repeated attempts. He was so anxious to move on to his friend's house that he risked calling his mother and sisters during the course of their dress shopping. They began calling me, too, with increasing alarm -- even though I told my wife my battery was low and even though she knows I have no car charger. I don't drive that often that one is needed.

So, while I'm wandering around the school, I'm the only one in the family who doesn't know where the kid is. For all I know, the information regarding his current whereabouts may even have been posted on Facebook. But I didn't know. I went home, frantic, intending to call the kid's cell phone from there and figure out where he'd gone. I wasn't looking forward to telling Long Suffering Spouse I'd lost her youngest child.

There was a flashing light on the home answering machine as I walked in the door. I did not take off my coat. I ran to the machine to push the button to hear the message. It was a call from Youngest Son. I'd figured out little more than that when the phone rang, terminating the playback.

It was Younger Daughter. "Your phone isn't on," she began, and I blew up at her, telling her in loud and brief and pungent phrases that I knew very well that my phone wasn't on and that I needed to use the land line, that she was calling on, to track down the whereabouts of Youngest Son.

When I paused to take a breath -- and this took awhile -- she told me where her brother was.

"Well, why," I asked, exasperated, "didn't you start out with that instead of telling me something I already knew?"

Yes, cell phones simplify our lives. Or give us apoplexy. I guess this essay will not be made into a cell phone commercial any time soon. Perhaps a commercial for car chargers?
Posted by The Curmudgeon at 9:12 AM

I have technophobia as well. Gadgets are scary.

one of my offspring frequently uses the "my battery died" excuse for not calling back....and not answering...et cetera.

I bought him the car charger.

I get so few calls on my cell phone that when it does ring, it usually startles me. I have also been known to ignore a call, especially when it’s not convenient for me to take it. I guess that makes me a bad person!

I detest having to be available 24 seven. My kids think it is necessary (well, it kinda is between them and me - but not between me and everybody else).

It's my phone after all.

For what it's worth, I would've gone forward with the same reasoning you did.

And I still contend that cell phones steal the independence & rationale from kids who carry them. They eliminate the need to plan and think. Instead, most cell-enabled kids just wander blindly off into the day, knowing that they're never more than a button-press away from their parents or friends who'll swoop in and rescue them at the last minute.