Poor Ron Santo: He doesn't know how lucky he is 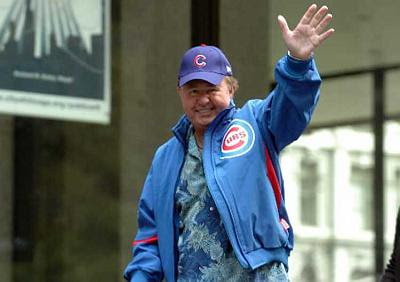 Believe it or not, it was only Monday that the biggest story in Chicago was that Ron Santo was once again denied entry to the Baseball Hall of Fame.

Ron Santo is a beloved figure in this town. He's the color commentator on the Cub radio broadcasts and -- from what I'm told -- his comments are often just groans or shrieks or cheers, depending on what the Cubs are doing on the field.

And he has a compelling personal story: He had a long and successful playing career even though he had juvenile diabetes. He's lost parts of both legs to the disease in recent years. He's not been in the best of health.

I never really saw Santo play much. After all, he was only with the White Sox for one year (in 1974) and his statistics that one year weren't exactly Hall of Fame caliber: In 117 games for the Sox, Santo batted only .221, with just five homers and 41 RBI. He was used more as a DH or second baseman with the Sox; we had Beltin' Bill Melton as our regular third baseman then.

I know some of you, knowing the rivalry between Cub and Sox fans in this town, may think I'm being snarky by saying that Santo should be relieved that he's not been enshrined in the Hall. But I'm being sincere. 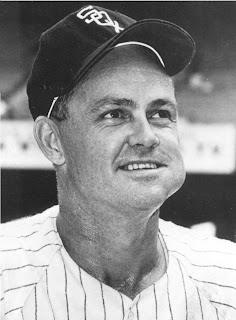 I'm thinking of the last great Chicago ballplayer who teetered on the cusp of Cooperstown for many years.

Every year, an ardent campaign would be undertaken to get Fox in the Hall. A lot of prominent people joined the Nellie Fox Society to promote his election.

Fox died in 1975. He wasn't around to experience the annual ritual of his being snubbed by the Hall. In 1985, the last year of his eligibility on the writers' ballot, Fox got 74.49% of the votes -- just two votes short of the 75% needed for election. The Dean of Chicago sportswriters, the late Jerome Holtzman, later baseball's official historian, argued that the numbers should be rounded up so that Fox would be elected. The Hall said no.

Like Santo, Fox had the numbers on the field to merit election.

So -- every year -- there was a fresh outcry over the injustice of it all. Fox, long dead, remained very much alive in the hearts of his partisans. 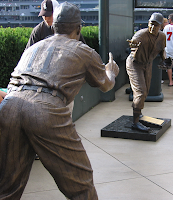 And then the Veterans Committee finally relented and Fox got in. Fox has a statue now along the outfield concourse at U.S. Cellular Field. But it's just not the same.

So -- Mr. Santo -- take it from me, a lifelong Sox fan: Don't be so upset that the Hall has denied you again. A lot of people are very upset for you. On your behalf. And you should bask in the glow of their genuine affection.
Posted by The Curmudgeon at 9:27 AM

Cur, I red this whole thing even tho it looked sports-related cuz there is moe to sports than, well, sports. You wrote very touchingly about a man with character and personal courage--a nice contrast to the politico posts--and came away with a great home truth--the wodrful, priceless gift of genuine affection. Well done.

I agree. It's a shame that Santo is not in Cooperstown, but some of those guys can be idiots. I am a bit more than a casual baseball fan, and I was surprised to hear how ridiculously Nellie Fox was treatd on his journey into the hall posthumously.

And I too, say 'Ron, just bask in the affection that you have from Chicagoians, rest of Americans, if not the Hall.'