A little perspective, please, on Obama and Blago 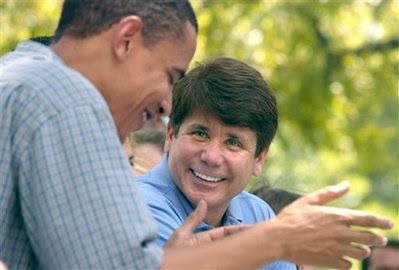 In a comment to my post yesterday afternoon, Sarge asked the same question a lot of people outside of Illinois asked yesterday: Will the revelations that Illinois' Democratic Governor, Rod R. Blagojevich, was trying to auction off Barack Obama's U.S. Senate seat somehow 'dirty up' the President-elect? (At his site, Sarge provided his answer: "The fact is that Chicago has had corrupt politics forever and now we have a President that was born in that corruption.")

But that doesn't mean that the President-elect is personally tainted because he comes from here. I come from here, too, you know, and I don't think I'm corrupt. (Of course, I have been a spectacular failure in my brief forays into politics... but that's a different story.)

It is part of the ritual that, when a politician is charged with official corruption, his or her colleagues immediately attempt to distance themselves. And the ritual was observed in Illinois yesterday, with one politician after another (Obama included) saying how little contact they'd had with Blagojevich, how seldom they'd seen or spoken to him.

Oddly enough, in this case, these politicians were telling the truth.

Well before his indictment, Illinois politicians complained that Blagojevich was inaccessible. He did not live in the Governor's Mansion in Springfield; he seldom even visited his Chicago office. He appeared at events, staged for the media, and then went home. One local TV station staked him out for days -- he didn't leave his house at all except for a couple of choreographed events -- and no one came to see him, either. Of course, he could have transacted business by phone.

But, if he was, he wasn't talking to his fellow office-holders. Sen. Dick Durbin recently complained that he had to wait something like 11 days to get a return phone call from Blagojevich when he called to discuss the Senate vacancy.

The AP photo by Randy Squires, at the top of this post, which appears to depict Obama and Blagojevich swapping pleasantries as if it were Old Home Week, was actually taken in August 2005, on Democrat Day at the Illinois State Fair. That's the kind of event where Blagojevich might be seen with other pols -- and, even then, in more recent years, many politicians would go out of their way to avoid any event when they might have been seen with this guy.

And I'm talking before yesterday.

It's not just because Blagojevich has been unpopular. It has been widely known -- to everyone, that is, except perhaps the Governor himself -- that he was under increasingly close Federal investigation. Pols generally distance themselves from persons under threat of indictment. There's a certain fear of guilt by association. There's a concern about the likelihood of being taped.

There was a weak joke when Blagojevich was sworn in for a second term (yes, I can't believe we reelected him either -- but that's how heavily Democratic Illinois has become): Who was the happiest person at the inauguration? Answer: Lt. Gov. Pat Quinn, of course, since he's going to be governor soon.

Illinois Attorney General Lisa Madigan said she'd not talked to Blagojevich since the 2008 Democratic Convention in Denver. It was at the convention, you may remember, that Blagojevich and his nemesis, Lisa Madigan's father, Illinois House Speaker Michael Madigan, exchanged hugs. This excerpt from an August 28, 2008 story in the Chicago Sun-Times by Abdon M. Pallasch and Dave McKinney is presented to refresh your recollection about that bizarre incident:

"If there's anything we've ever done or I've ever done to offend you, I'm leaving it at this convention. You're my friend, and I appreciate you," Jackson said, jumping off the dais to give Rush a long hug to cheers from hundreds of delegates.

"All is forgiven," Rush said.

Jackson continued his redemption tour, calling state Sen. Debbie Halvorson over to apologize for the startling attacks he made on her as the Democratic candidate for the congressional seat next to his because he disagreed with her approach on the Peotone airport.

Then, Jackson asked, "Who else out here has been mad at me?"

Jackson cried. He tried to speak but had to step away again, wiping his eyes.

Turning to the grudge match that has had the most consequences for Illinois, Jackson said, "I'm not going to be satisfied till I see Rod Blagojevich give Mike Madigan a hug."

The two rose and gave each other the briefest hug of the love fest.

Anyway, nobody really had to 'throw Blago under the bus' yesterday -- and this includes the President-elect (whom Blago called, in one of the taped conversations, a phrase that rhymes with an other trucker). Blagojevich has been alone on Fantasy Island for some time.

This is not to absolve the President-elect of all sins of omission or commission related to political corruption in our home state. But the Governor's goofy hopes to sell Obama's Senate seat should not create any real difficulty for Mr. Obama at all.
Posted by The Curmudgeon at 8:28 AM

Excellent Post, honestly I hope there is no connection found that will stick to Obama. I do not think America is ready for another term like Clinton's second or the Watergate era. Since the Democrats have such solid control I do not think it will happen. If a President Obama makes it to a second term I think we could get an instant replay.

I've said it before and I'll say it again: The world of politics makes a tornado look organized. Not only does the right hand not know what the left hand is doing, sometimes they need to commission a study to find that there is, indeed, another hand! Don't mistake me, I honestly believe that Obama had no intimate knowledge of what Gov. Dead Meat was up to. And I don't think Obama will be getting any on him, either. I just deplore the tendency of the media to try to make something out of the most tenuous of connections in any political candidate. "He was in third grade and shared an apple with 'Miss A' who was later arrested for bribery and corruption". Ok, so 'Miss A' was arrested for bribery and corruption 20 years later..do they really think sharing an apple in third grade corrupted the candidate too? Sorry...you pushed my rant button...turning it off now...

I've only just heard of this seat-selling scandal!

I referenced your post in a new one of my on....

Good post. I think it will be a while before guilt by association will be put to bed.

Blag the Self-Impaler and Obama were cool to each other at best. The Governor (and his wife for that matter) has got some serious issues.

I don't think this will taint Obama at all. Except for those who constantly look for shadows of conspiracy around Obama, and loathe the fact that he is the next President. Cheers!!

This was some great perspective. Chicago, yay even the whole of Illinois, is full of corruption. Yet, there are some - you for example to quote you, that are not.

There are others too I am certain.

I guess there's some good guys in Mississippi too. The non lawyers.

Ok, there are some good ones (but they're not filthy stinking rich off tobacco and Phen Fen money).

I couldn't agree more. You put it quite well - just because Obama is from Illinois, he should not be automatically tainted by the corrupt politics and politicians who share the same state or even office.

It would be like saying that I am somehow a bad person because my brother is a felon. He's the one who commited the crime, not me. Just because we come from the same family doesn't mean I condone the behavior or am should be seen poorly because of it.