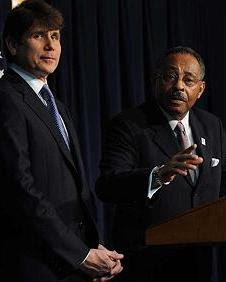 Photo obtained from the Chicago Sun-Times.

I'd bet he offered it to others, too. (Not Jesse Jackson, Jr. -- even Blagojevich isn't that crazy. I think. Maybe.)

No, I'm sure our disgraced Governor reached out to a number of prominent African-American Illinois politicians. Blagojevich was presumably trying to pander to the African-American community, figuring a few African-Americans will likely sit in judgment of him in a year or so when his corruption case comes to trial. Maybe, he hopes, one or more future jurors will be so grateful to Blagojevich for keeping an African-American presence in the Senate that he or she will vote to acquit, no matter what the evidence shows.

Another motive, perhaps, is to show that he, Blagojevich, is still in charge. He wants to put the Senate on the hot seat: To reject an impeccable choice like Roland Burris will persuade some people that the Senate is just another group of racist white folks. Yes, that's cynical, racial 'wedge' politics -- the kind of stuff supposedly rendered obsolete with Obama's election. But it may still work: Blagojevich hopes that some senators will fear tarnishing their liberal credentials to the point where they feel they must accept Mr. Burris. If Blagojevich can make this appointment 'stick', he shows he can still 'govern' -- at least this is the discharge of one of his job functions -- and he may thereby take some of the wind out of the sails of the impeachment drive.

I think that, if this is what Blagojevich truly thinks, he's dreaming. But, then, I though he was dreaming when he thought he could get reelected in 2006 despite the federal investigations already swirling around him.

But he got reelected.

Still, I'll let others speculate on Blagojevich's motives. I want to talk about Roland Burris.

There are those, today, who are denouncing him for saying 'yes' to Blagojevich's request that he accept the appointment. He certainly didn't have to agree.

Burris did not need this appointment to secure his place in local history. He was the first African-American elected to statewide office in Illinois ever. He served as Illinois Comptroller from 1979 to 1991. He served four years as Illinois Attorney General after that. Barack Obama stands as much on Mr. Burris' shoulders as he does on any one else's. Burris blazed a trail that Obama could follow.

It's all too easy to lose an election -- so much harder, sadly, to lose one's ambition.

So before you cast stones at the man for saying 'yes,' are you so sure you would have said no? Maybe it would be easy for you because you have no political ambition... but have you ever wanted something else -- something that you wanted so badly you'd do almost anything to get it?

There's a reason why Jesus included "lead us not into temptation" in the Lord's Prayer. He knew, surely, that people are susceptible to temptation. We may know what's right and what's good in the long term and we may still succumb when tempted. Don't put us in that spot in the first place, we pray, every time we say that prayer. Don't set us up to fail.

Rod Blagojevich tempted Roland Burris with something Burris wanted in the worst way.

I feel sorry for Mr. Burris today. I would have hoped he'd be stronger. But I can't promise I would have been. Lead us not into temptation. And deliver us from evil.
Posted by The Curmudgeon at 10:46 AM

I live in California so this story feels like it's happening in an alternative universe. A very very strange universe. The whole thing has been performance art from the start hasn't it?

I don't really blame anyone but Blagojevich at this point. The nerve of that guy never ceases to amaze me.

hi curmy. like you i immediately thought "well they can't say no to him or they will be called racist". too bad, huh?

This is a very good post about an impossible situation. It is a no win almost for about everybody involved and the "would be uns" and the "could be uns".

Oh bother (as Eyeore would say on Winnie the Pooh).

I think it's earthquake weather.

I also thought that Gov. Blago figured if Burris were to be rejected they would be considered racist. Why do all pols have to play the race card?

Aren't we all people first, before race or ethnicity? I dunno. I am easily confused.

P.S. I wish you and yours a Happy and Healthy 2009, Curmy!
You have a thought-provoking blog that I should visit more often. I always enjoy it when I do come over to see you.

Don't be so sure Burris is squeaky-clean on this one:
http://idiotfreeamerica.net/?p=212
Turns out the sergeant-at-arms of the Senate is one Terence Gainer, who worked for IL State Police when Burris was AG.