McCain commercials use the wrong woman

You may have read about or seen the new McCain commercial that uses images of Britney Spears and Paris Hilton to emphasize that Barack Obama is a "celebrity" -- the biggest celebrity in the world, the ad says... but is he ready to lead? (You can watch the commercial, at least for now, by following the link to the Huffington Post.)

And, if he's still running against George Bush in November, Obama will win. Hands down.

So... in the interest of making things more competitive, let me suggest that Senator McCain stop running images of Paris Hilton and Britney Spears in his commercials and start running images of... Hillary Clinton. 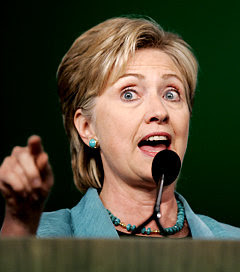 And not just images, either. Footage.

There's plenty of footage of Hillary bashing Obama -- saying he's not ready to lead, that he's untested, that he's been anointed as the media's darling without having first been 'vetted'....

In the meantime, while running Clinton clips, Senator McCain can try and make the larger point that he's running against the Democratic Party, not against Sen. Obama individually. He has to make the point that Obama is a creature of his party, beholden to his party, and when if Obama is elected, we will get all of them, too. Even the Clintons. And every crazy, regulation-loving apologist for the nanny state that goes along with the Democratic line.

The Democrats can't really fight back too well on this line. Right now, of course, they are calling McCain the stalking horse for GWB's third term and so forth... but only because McCain has not challenged this. Yet, McCain can credibly make a distinction between his own maverick career, often at odds with his own party, and Obama's career... which has never strayed an inch from the party line. He really hasn't had the time to stake out any major differences, even if he wanted to. When the Obama camp links McCain to Karl Rove, McCain can take refuge behind fawning clippings from, of all things, the New York Times (genuflection optional).

Is this negative campaigning?

Yes. But it's going to get negative anyway. We might as well have it negative and competitive.
Posted by The Curmudgeon at 12:35 PM

great idea curmy and while he is at it he should use some of nobama's wife's mouth too!

I think there's two reasons why Sen. McCain would be well advised not to go after Mrs. Obama. First, she'd be an object of sympathy in many quarters -- she's not the pol -- not like Bill and Hillary campaigning as '2 for 1' in '92 -- and, while I think I said here that her remark about pride would be a commercial... I honestly think it might backfire. Second, I don't think Sen. McCain's wife would be all that thrilled... because then she'd be fair game, too.

Great post. You should be an advisor to MCCain's campaign and he would win for sure!

Images of Britney and Paris? What a weird campaign.

Michelle will not be a factor in BO's campaign any more. She said enough, and much of what she said is out there for all to see. McCain doesn't have to mutter her name...the voting public will know her just fine.

BO shouldn't want Hillary to be an enemy of his. But who knows if she has a convention surprise about BO in Denver...

What is it about Chicago based politicians, and I'm counting Hillary here. Going back to the days of Big Bill Thompson to THE definitive (as far as I'm concerned) Mayor Daley to Jesse to BO. Must be a lust for power and control, almost hereditary to politicians raised in the Windy City...

Great post. You should be working in someone's campaign.

"I don't think Sen. McCain's wife would be all that thrilled... because then she'd be fair game, too."

Exactly and what with the drugs and adultery, she probably wants to avoid that.

Oh, my, I don't think I could understand the campaign even if I were back there, but this much anger and hostility makes me glad I am not there.

The democrats can't hold a candle to the nanny state they have here. I'm not recommending it--just lamenting the overwhelming ocean of regulations and politicians who make more and mroe rules about less and less.

Gosh, do you want McCain to win?? ha ha

I think McCain needs to get a different strategy, but the Republican Party really needs to get off the middle of the road and make a statement about their intentions for a platform. I think the biggest thing will be the energy policies.

I think you're at least as good as Zippy the Wonder Horse :P