Indifferent to the Olympics... but feeling only sort of guilty about it

(Brewster Rockit comic found at Gocomics.com. Click to enlarge.)
I gather that a lot of people are enthralled with the Olympics, not just in the United States, but around the world.

I appreciate that these are superb and dedicated athletes... but they're mostly engaged in sports that I don't follow, don't understand, and won't see again for four years even if I suddenly got interested. Let's face it: Does anyone really understand the gymnastics scoring system? Do the gymnasts?

Some guy named Phelps may break the record of seven gold medals won by Mark Spitz at the 1972 Munich Olympics. I hope he does. Spitz got a Wheaties box, as I recall. Phelps will probably get much more... and probably deserve all of it.

But I just can't get worked up about it.

Neil Steinberg writes in this morning's Sun-Times that the "best thing that can be said about the Olympics is that it's better than war. But the underlying principle -- my country beats yours -- is the same."

That reminds me -- has NBC done a feature on how the Georgian athletes are getting on with the Russian athletes in the Beijing Olympic Village these days? 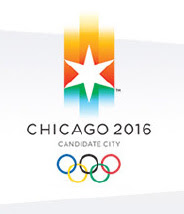 Still, I don't want to sound too mean-spirited or snarky about the Olympics.... I'm from Chicago and Chicago is, as you may know, one of the four finalist "candidate cities" for the 2016 Olympics.

I'm not certain whether I'm enthusiastic about the bid either. But it certainly would be interesting if Chicago gets the nod. A lot of people will make a lot of money off of it, that much is certain. Who knows? Maybe the trough will be so full the some crumbs will spill down to the rest of us here....

In fact, following the money trail would be an Olympic sport about which I could become truly enthused....
Posted by The Curmudgeon at 1:05 PM

I wouldn't be too keen on the Oly,pics coming to your city...it'll cost!

Think of how hard it'll be to get to work if the Olympics came...

I'm having a hard time this year... and not wanting to be snarky (but kinda yeah, being snarky) I'm not sure if it's because China is showing us how the face it shows us isn't actually the real thing (fireworks, lip syncing symbol, etc etc), the knowledge that the Chinese demand a certain amount of success, the fact that Russia is invading Georgia, or like, that Phelps is winning everything... I'm just not sure why this year I'm unimpressed.

Though, I did take a moment to pause, and watch Olympic Badminton...

I really haven't been all that enthralled with the Olympics though I have seen bits and pieces of it while at work.

I'm not sure whether I'd want to live somewhere that the Olympics were being held at. Imagine the crowds - ugh!

Wondering about the Chicago ramifications as well. . . .

OLYMPIC DREAMS, on THE MANE POINT

I have not been watching the Olympics either tho I confess I may some time watch NBC coverage of opening ceremony.