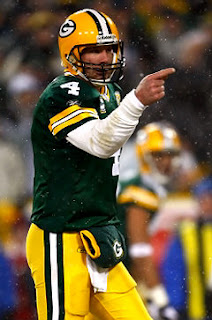 That's the report in this morning's Chicago Tribune: Green Bay has offered Favre $20 million over 10 years just to stay away from their training camp. That's $2 million a year for 10 years.

This Favre situation is the opposite of the Michael Ovitz situation back in the mid-90's. Ovitz was hired as Disney's President -- and then canned after only 16 months. He was allegedly paid tens of millions in cash and stock... just to go away.

At the time, I said I could have failed for far less than that.

And in less time, too.

But here? Favre is being offered money so management doesn't fail. To protect management against the off chance that Favre might actually succeed somewhere else.

Either way... being offered millions of dollars to do nothing is a wonderful dream of mine. And I do nothing better than almost anyone....

Buddy, that would be my dream too! I'm really good at failures so I'd have no problem trying something and getting canned -like the former Disney head. But I'm really out of touch with sports so have no idea in the world why this offer is reputedly being made to Favre. What would be the logic there? I thought he's supposed to be a great player, isn't he?

well this started out as a sports things but i perked up when i saw disney then it got good! woo hoo curmy! ha ha ha

Paying people not to play football? The Cleveland Browns have been doing that for years.

The Impossible Dream! Perhaps you could get someone to pay you to stay out of court. Hey, did you get to see Judge Judy climbing under her desk during the earthquake? (And the poor litigants were left rocking and rolling in the courtroom)

We all had something to say at my house for getting paid to not play and stay away. My younger son is a great Packers fan and was a great Farve fan. His room is painted Green and Yellow, the carpeting, the bedding, there is no space on his walls because of all the posters etc.
I think he still likes Farve the QB but isn't too happy with the person. He thinks he should have been agreeable to be traded out of the division like Montana did. He's upset at how this has all played out. It's brought up a LOT of discussion at the dinner table and I'm hoping he's learned a few things of what NOT to do from all of this.