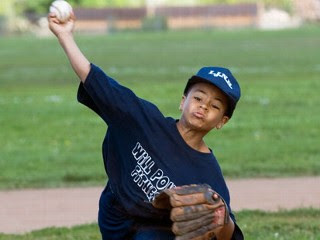 (AP photo by Doug Healy; obtained from ABC News website.)
This is a photo of 9-year old Jericho Scott, a Connecticut kid who throws hard for his age -- somewhere close to 40 mph, supposedly -- too hard for the league in which he's been playing. So hard, in fact, that he's been told he can't pitch any more.

John Christoffersen's story for the AP is all over the place today; I read about it this morning in the Sun-Times; here's a link to the AP website.

Now, I usually hate it when some blowhard passes judgment on people from a thousand miles away on the basis of a single news story. But I'm passing judgment here: Everyone involved in this story -- Jericho's parents, his coach, the league, the other coaches -- every last one of them should be ashamed of themselves.

This one little excerpt from Mr. Christoffersen's story tells you just about all you need to know:

Jericho's coach and parents say the boy is being unfairly targeted because he turned down an invitation to join the defending league champion, which is sponsored by an employer of one of the league's administrators.

Jericho instead joined a team sponsored by Will Power Fitness. The team was 8-0 and on its way to the playoffs when Jericho was banned from pitching.

Naturally, the league has a lawyer: He's quoted as saying that the kid is just too good for the league, which is developmental in character, just trying to promote the sport.

The lawyer has a point.

He and his client are all wrong about banning the kid and disbanding his team, of course, but the truth is, if little Jericho is that much better than the other kids, then he should be playing in a better league. Maybe against older kids.

Jericho's mom is quoted as complaining that it's "discouraging" to tell a 9-year old that "you're too good at something." Jericho's parents are consulting their own lawyer, one John Williams. Williams is also quoted in the story. "You don't have to be learned in the law to know in your heart that it's wrong," he said. "Now you have to be punished because you excel at something?"

It is not punishing a kid to move him up a level where he can really test and develop his skills. Humans don't get better at things by succeeding -- we learn from our mistakes (hopefully). The kid should be playing against 10 or 11-year olds, maybe in a travel league, where he can actually be tested.

One of my sons was once like Jericho is now -- way above the other kids his age. When Middle Son was starting his career at Bluejay Park, one of the coaches asked him why he wasn't trying out for the 9-year old all stars. "But, coach," Middle Son said, "I'm not 8 yet."

Middle Son went high in the next year's draft. And he played on both the 11-year old and 12-year old all stars when he was 10. We moved him up a league at least a year before other kids his age. It helped that he was one of the youngest kids in his class at school, so he was never really more than a year behind his teammates in that way.

In fact, the first time he played with his actual age group was on a competitive travel team after freshman year of high school. Middle Son, now 21, is still playing.

I hope Jericho gets the same chance. He might... if his parents, coaches, league officials and lawyers all GROW UP.
Posted by The Curmudgeon at 12:50 PM

You did a much better job on this story than I did. I should have known that you would pick up on it in the Chicago papers.

It's always wise to move up to where they are tested.

I totally agree. When I was in fourth grade it was suggested that my mom move me up a grade and she said no because she didn't want me to be the youngest kid in my class. What kind of reasoning is that? I ended up a lazy student because I didn't have to work that hard. Not good habits to establish for college. I'm all for challenging our kids.

some things just piss me off, oops, can I say that on you blog.

Living near New Haven, this story keeps on giving. It seems that Jericho would have started if he was a member of the 'right' team.

Not all finesse occurs on the playing field - the rigging of rosters might be a common event...

How is it beneficial for anyone if the boy is SO much better than everyone else and hits someone and hurts them?

My son is ten and was hit by a kid who couldn't even throw that hard. Not only was he hurt, he was spooked for most of the season because he was afraid he was going to be hit again. I can't imagine how it would have been had the boy thrown the ball at 40mph, we would have had a much more serious situation on our hands.

Parents constantly amaze (not surprise) me.