Obama an elitist? Well, yes, but aren't they all? 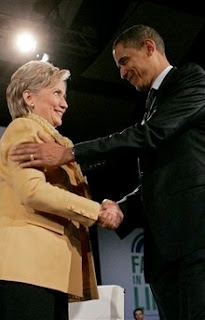 Senator Barack Obama's drive to the Democratic nomination hit a big pothole over the weekend when it was revealed he'd made extemporaneous remarks at a fundraiser, to which the press was not invited, that Hillary Clinton called "elitist, out of touch, and frankly patronizing." (The first link will take you to Richard Roeper's column in today's Chicago Sun-Times; Roeper reprints Obama's controversial remarks in the second half of that column.)

Why should it surprise anyone that Obama sounds sometimes like an elitist, particularly in an unguarded (and supposedly off the record) moment? He's a Harvard-educated lawyer who's taught at the University of Chicago, a United States Senator, married to a Princeton-educated, highly successful corporate lawyer. 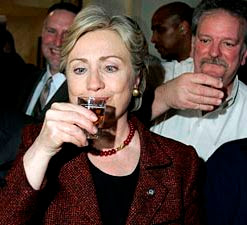 But let's take a breath: Does this make Hillary a Champion of the Common Man? She and Bill have raked in a cool $109 million in the past eight years or so. She's a Yale-educated lawyer, United States Senator, and the wife of a former President of the United States (and Rhodes Scholar).

Nor should we exclude Senator McCain from this analysis. Not only is he also a member of the World's Most Exclusive Club, he is a graduate of the United States Naval Academy. He never achieved flag rank in his own right (he retired from the Navy as a Captain), but he is the son and grandson of four-star admirals.

None of these candidates could or should be confused with Ralph Kramden or Ed Norton. Nor would we want to put Ralph or Ed or Cliff or Normie (from Cheers) into the White House.

What may be important is that Sen. McCain has experienced adversity, very personally, as a prisoner of the North Vietnamese. Sen. Obama has witnessed adversity as a community organizer on Chicago's South Side. Sen. Clinton has read about adversity and a lot of other stuff, too.

And it isn't just folks in small towns who are bitter about what passes for political discourse in this country.

Well put. Though I could see Norm in the Cabinet: there's a long tradition of buffoon sidekicks. Wilbur Mills, Burt Lance, Alberto Gonzales.

Agreed. That's why it is so lame that TV runs their sound bytes and photo ops as if they were news.

We need one national primary with a spending cap and stop all this nonsense.

I am laughing out loud, Curmy. Especially about how our Hillary has "read about adversity."

Ditto. Agreed. And ditto some more!

PS I love that pic of Hill!