I finally broke down and got a haircut this weekend -- it's not that I didn't need one, it's just that I couldn't see blowing the better part of a double sawbuck on something that wasn't absolutely vital.

It's not that I'm cheap. It's that I'm broke and I'm cheap -- which makes for an ugly combination.

It was so windy Saturday morning that the car door got away from me as I was trying to open it -- this was against the wind and I (almost) made the painful mistake of trying to grip the door with my right hand... which would have been entirely crushed about a millisecond after I made the attempt.

Chicago, you may know, is called the Windy City. But it's not for these gentle spring Zephyrs. Most historians agree it has to do with the volubility of our politicians (the volubility of our bloggers not being taken into consideration back in the 19th Century, when the nickname was coined, Al Gore having not yet invented the Internet).

But back to my hair. Even my loyal Long Suffering Spouse said I looked like a clown.

The sad part is, there is less and less hair on the top of my head, so when what's there gets long and windblown, it really does look clown-like. Bald clown-like.

Only my hair is gray.

My body instinctively knows that it is losing it's natural cover. And it's trying to compensate.

But it's aim is lousy.

That's the only explanation I can think of for the hairs sprouting at odd places on my ears. This morning I cut a three inch hair that had mysteriously sprouted beneath my eyebrows and above my eyelashes. I couldn't see it in the mirror, but I knew it was there because it was driving me crazy when I wore glasses. I thought I was looking through a haze. 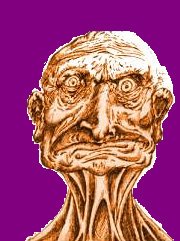 So I got the haircut and I look appropriately businesslike and professional again. Ironically, with the hair very short I look less bald.

If you stand at certain angles.

And the lighting isn't too bright.

Maybe tomorrow I'll resume pontificating on matters of great import and moment. But, looking increasingly like the fellow on the right, it's hard even for me to take me seriously.

sarge too, he has to pay for a whole hair cut and only has a little hair. doesn't seem right, huh?

I am currently at odds with the missus. She told me that my hair over my ears looked better when I was 25, but seeing that I'm 52, I should get it cut. I told her I wasn't, but she said if she gets her way I will.

It's good to not take oneself too seriously. It's actually quite freeing.

Tis true that soft lighting is a friend to all of us middle-aged people.

I like long hair like I had when a teenager. I haven't changed the style in over 35 years!

At least you are not bald, you should be proud of your crowning glory. A pity we can't see a picture.

Growing old sucks. I get those same kind of hairs growing in places that were once barren. Plus my eyebrows sometimes look Mr. Spock's.

My hubby of almost fifty-five years loves to get his hair cut very short and would love a "butch". He would like to try a beard, too, but the odd hairs of which you speak are inhabiting his face and are similiar to paper clips in texture. I would like him to be clean shaven and a little longer in the head hair (it hides the pink scalp), We never agree with each other on what looks best on the other person, but we have to look at each other more than at ourselves. You men need a spa just for guys --- the treatments feel so goooooood!

My husband cuts my hair. The money we save helps to make up for my lousy budgeting skills.

I fight with my hair regularly, though I'm against all the gray hairs. Don't even get me started on wrinkles.