Senate hammers out bipartisan path to citizenship for illegals, promises to tighten borders. What could be wrong with that? 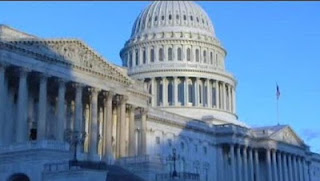 Hey look, Congress may be about to do something! Stop the presses! Ring the bells!

A bipartisan group of U.S. Senators has announced a 'tough but fair' path to citizenship for illegals already in this country, a plan that, according to an editorial in this morning's Chicago Sun-Times, accommodates the Republicans' demand to secure "the border against future illegal immigration." Over in the House, former Republican Vice Presidential nominee Paul Ryan has also indicated a willingness to consider immigration reform.

So what could be wrong with this?

Where in these proposals are tough penalties against employers who lure illegals over the border with promises of employment? Where is the enforcement now? Every big company in America has exposure on this, restaurants and banks and hotels and retailers and manufacturers. And, yet, no gringo goes to jail.

Here's how it works in the real world: José sneaks across the border, finding a job at a factory in Iowa, and sends money home to his mother each month. When José's employer is ready to hire, he gets the word to José: We have more jobs coming open. José lets the folks back home in his village know -- and a new northward surge begins.

José and his once and future neighbors make more than they would have made at home -- and the jefe Americano pays them far less than he'd have to pay Americans. El jefe doesn't have to worry about unions or overtime or insurance or anything. If an employee gets out of line, he can cut him loose faster than he can say, "I'm shocked to find you don't have a green card, son."

Meanwhile, our own young people can't find entry level employment because the minimum wage is insufficient to feed a family (which, of course, is true -- but irrelevant when considering the parlous employment prospects of the all-American teenager).

I don't blame José for coming here. José and his fellow villagers are doing what our parents, grandparents or great-grandparents did, and for the same reasons: José wants a better life for himself and his family. His neighbors want the same. So did our ancestors. That's what America is all about, darn it.

I do blame the cynical store owners, restaurant owners, factory owners -- los jefes Americanos -- who flaunt the laws about hiring illegals knowing there's no consequence for their crimes -- and lots of opportunity for profit.

And I blame Congress for not going after the bosses... many of whom are contributing some of their profits back to the politicians who allow them to continue doing what they're doing.

Congress is acting -- if it really does act -- here for the most cynical of reasons: It's all about votes. Republicans are interested in immigration reform all of a sudden because Mitt Romney got so little Hispanic support. He's got Mexican relatives -- but few Hispanic votes. Meanwhile, the Democrats see José and his ilk as Future Democrats of America. Once they tread the 'path to citizenship,' however long, Democrats are betting they'll become a virtually captive constituency, at least in the big cities, just as African-Americans already are.

But neither party wants to upset the corporations that profit from illegals... so here's what's going to happen.

If José registers for citizenship, his boss would have to start paying him minimum wage, paying employment taxes, paying Medicare and Social Security. José may be a great worker, and in some cases it'll work out, but there's probably a good chance he'll get tossed out on his kiester. Not immediately, perhaps, but as soon as possible.

José's kinfolk will get the message: Don't register. And, if they do, well, there's a lot more villages in Mexico. And we'll have a sudden surplus of unskilled Spanish-speaking workers who were making a living, now forced on a path to dependency.

Here's what should happen: José registers, as do all his friends and neighbors from back home now working at the factory. ICE comes in and charges the boss criminally. Faced with jail and the certain loss of his business, the boss suddenly decides that he can keep José et al. on board after all, even when he is forced to pay an appropriate wage. Some bosses do go to jail. Getting a few Forbes 500 CEO's in a perp walk on the evening news will convince their brothers and sisters to take hiring and wage laws seriously.

This is a Main Street issue. Wall Street benefits more from and (carefully removed from direct contact by several layers of subcontractors) treats illegals worse than the small business-owners left on Main Street. Republicans are trying to shed the label of the Stupid Party. But "No Longer the Stupid Party" is not a particularly positive name. As part of a plan to become the Party of Main Street, not the Lackeys of Wall Street, the Republicans should insist on aggressive enforcement of immigration laws -- existing and proposed -- against employers.

Email ThisBlogThis!Share to TwitterShare to FacebookShare to Pinterest
Labels: Immigration, News and Views

Being scarcely more than a stone's throw from said border, I can tell you that Jose isn't sneaking across - he's practically sauntering across.

And why wouldn't he? There's no real penalty for doing so. And certainly nothing worse than if he just stayed in Mexico.

We absolutely do need to come up with equitable solution for those who are already here (and predominantly, productive members of our society).

And we do need to deal forcefully with those opportunistic employers who are only feeding the fire.

But we've also got to stop the perpetual surge of new illegal immigrants. And that's not going to be accomplished via any fence boondoggle.

We already have all of the military resources (personnel, equipment, technologies, and tactics) to deal with the border in a finite way. We only have to summon the intestinal fortitude to apply those resources.

And let's face it, if we're pulling said personnel out of the Mid East, what better way to ensure that they don't simply become additional unemployment statistics than to put them right back to work defending (aggressively) our southern border?

Rob, José is neither sneaking nor sauntering across the border because he's dumb -- the men and women who are coming here for work are sharp (if not well-educated) and ambitious. We don't need fences: They won't come if the jobs aren't here.

The jobs won't be here if the folks who would hire José et al. realize they risk jail when they're caught -- and that there's a good chance they will be. In fact, with our economy in the tank, I've read that there's been something of a reverse exodus in the last couple of years -- José may still be here but a lot of his neighbors have gone back to Mexico because the jobs here dried up.

Now, as for the drug smugglers -- they're not likely to be impressed by laws, fences or whatever. I read recently where a number of our border agents had been arrested, accused of taking bribes from drug smugglers. Rotating troops through border posts might reduce opportunities for systemic corruption.

Or... I know this sounds crazy and all... but maybe we can end Prohibition 2.0, finally conceding that the sequel was as dismal a failure as the original.

I feel like I owe you an apology - I went way off on a tangent with my initial comment.

I definitely do agree that we could end a lot of the illegal immigration problem by radically reducing the employment incentive.

But we also need to address the border issue. As perviously mentioned, we have the resources ready to employ; we have only but to be bold enough to use them - and have the spine to (largely) ignore the inevitable backlash.

In all fairness, we should give President Nieto advance warning that either he can stop the flow of his people across our border or we will do so in an aggressive and determined manner.

And then there is another, albeit incredibly radical, option... take Mexico. Seize that bad boy, carve it up into 8 new states, upgrade the vital infrastructures, and move forward as the newly-expanded United States of America. Sure it may sound a bit insane, but where do you think we got the other 50 states? Why is it so unfathomable than we could engage in another bout of empire building? If most of Mexico's problems are ours to solve anyway, let's take them head-on, not second-handedly.

By the way, I couldn't agree more about ending Prohibition 2.0. I've long since been in favor of allowing U.S. farmers to grow a crop they can sell for a profit instead of crops that sell for so little that they have to be propped up with government subsidies.

Conversely, if our officials are foolishly determined to keep trying to crush substance users under the government heel - at great cost to unwitting/unwilling taxpayers - then let's target Coors Light also! I mean, if we're going to pick on people, let's at least be equitable about it, right?

Rob -- We gotta get you some decaf or something. Wow. I would hope all thoughts of expansion by conquest are off the national agenda at this late date. Yes, the Gasden Purchase was meant to secure a potential rail route, but it was also, I think, a payment to assuage our national guilty conscience over steamrolling Mexico in 1848 (not the the Mexicans necessarily accepted it as such).

Besides... de-incentivizing employers from hiring illegals (send 'em to jail) gets rid of the bulk of illegals: They won't come when there's no work to come to. Ending the futile War on Drugs puts the narcotraficantes out of business, too. Surely we can effectively police our borders after that without threatening our neighbors, can't we?

My wife would certainly agree with you on the decaf! :)