You probably saw this photo in the news earlier this month: A Colorado teenager -- we really don't need to put her name here -- who was miffed when this photo she submitted her official senior portrait was rejected by her school.

I'm not exactly sure why high schools would let kids provide their own portrait, as opposed to allowing the kid to make a choice from the standard photos taken by the school yearbook photographer. But I'll come back to that.

And in answer to your first and obvious question, according to this report from Today.com, the young girl's mother supported her daughter's protest about not being allowed to sport this getup in her senior portrait, even waving a placard out in front of the school one day recently along with other defenders of cheesecake shots.

I didn't run my take on the story when I saw this -- if it doesn't officially take me into dirty-old-man territory, it at least brings me uncomfortably close to Creepy-Old-Guy-ville. But that wasn't the only reason. I was sure I'd seen something like this before; I wanted to review the record first.

Well, yesterday I stumbled on this image, from back in December 2006, in the archives. 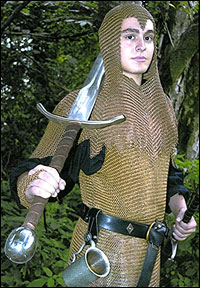 Surprisingly, the news story I linked to at the time is still online. This kid's mother did more than picket. She sued, demanding that this picture be published in the kid's yearbook.

Now... let's see... December 2006 to January 2012... that's over five years ago. The young man in the picture is probably through with college by now. Maybe he's out looking for a job.

Do you think maybe he's come to regret demanding that this be his senior portrait?

The young girl in the shawl and the smile could learn from Sir Goofyhad here. Although, now that I've looked it up, I guess the young man's picture is worse than the young lady's.

But back to the topic of senior pictures generally: The high school that my boys attended required all graduates to pose in a black tuxedo (with a standard white shirt and black tie) for the official senior portrait. The photographer supplied the tuxes, too -- so there were none of the embarrassing styles like I wore on more than one formal occasion back in the day. And my daughters went to a high school that made all the graduates wear a black sweater and a pearl necklace. The photographer supplied the pearls -- I know this for a fact -- and I think the photographer carried a supply of appropriate turtlenecks just in case some girl came unprepared. Or wearing only a shawl. At both schools, the kids were allowed to bring other clothes for other poses -- which the photographer would gladly try and sell parents. But there was no nonsense about what would go in the yearbook. And no lawsuits or morning TV show appearances either.
Posted by The Curmudgeon at 7:10 AM

Email ThisBlogThis!Share to TwitterShare to FacebookShare to Pinterest
Labels: Education, News and Views

guess i'm just (very) old fashioned, i want the old style photos... but she IS a looker!