Curmudgeon not the retiring type? 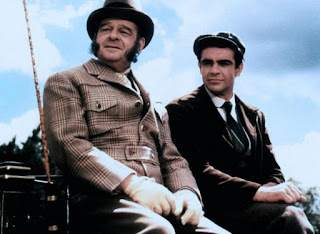 There's a little scene from Darby O'Gill and the Little People that's been much on my mind of late.

Lord Fitzpatrick is bringing his new caretaker -- yes, that's a very young Sean Connery, so young I think that may actually be his own hair under that hat -- to the manor house when he runs into Darby's daughter:

Lord Fitzpatrick: That Katie's a grand girl. Almost makes up for her father.
Michael McBride: What ails him?
Lord Fitzpatrick: Oh nothin' at all, but he retired about five years ago and didn't tell me about it. He'll be down at the inn now tellin' stories.

I'm beginning to feel as if someone retired me and forgot to tell me about it.

The office rent is due today. I don't have it. I'll charge my malpractice insurance payment this month because I don't have that either. I have a stack of unpaid bills in my drawer here that would choke a horse. It isn't quite as bad as it looks -- but only because foolish creditors keep sending new bills every month, and they tend to pile up. It's bad enough.

I can't get paid on anything these days. My case load is down -- losing a few appeals in a row will do that for you -- and the stuff I've got left ranges between awful and impossible. I said in my post earlier today that I spent yesterday curled up in the fetal position hiding under a table.

That's a slight exaggeration. But only a slight one. I couldn't move -- I'm afraid to move. When nothing is going right, why do anything? My wife thinks I'm depressed. Depressed? If depression were a contact sport I'd be a mass of welts and bruises from head to toe.

Of course, I suppose, like Darby O'Gill, I'm sittin' here at the Inn[ternet] tellin' stories.

And now I've told this one.

When there isn't enough work (or at least not enough receipts ), those of us who work for other people get laid off - but what do you do when you work for yourself? And how can you lay off half an attorney?

Dear Cur,
As I understand it you are living the life of all those in New America as my daughter calls it. You may well be depressed, but times being what they are as the wizard of OZ said maybe being depressed is the only reasonable reaction to have. If you weren't depressed, you wouldn't be understanding the situation correctly. So take courage from the fact that you are correct in sussing the situation and slog on.