This morning's Sun-Times carries a story about the possibility that the infamous 1919 Chicago White Sox (the "Black Sox") were not the first Chicago baseball team to throw a World Series. 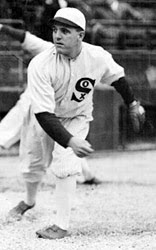 Indeed, if a sworn statement by Black Sox pitcher Eddie Cicotte is to be believed, Cicotte and the other "Eight Men Out" may have been inspired to throw the 1919 Series to the Cincinnati Reds by a rumor that the Cubs had purposely tanked in the 1918 Series, against the Boston Red Sox.

That's the series in which Babe Ruth pitched for the BoSox. His contract was sold to the Yankees soon thereafter, the start of the pervasive New England myth -- "the Curse of the Bambino."

The Chicago History Museum has posted part of Cicotte's statement online, in an article by Peter Alter entitled, "Did the Cubs lose the the 1918 WS on purpose?" 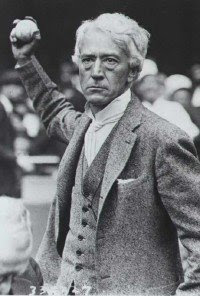 Even casual baseball fans know what happened to the Eight Men Out. Judge Kenesaw Mountain Landis, a man with a hard face and a shock of white hair that made him look like an Old Testament prophet with a sour stomach, disregarded the 1921 court verdict in which the Black Sox were acquitted (despite confessions from Cicotte and "Shoeless Joe" Jackson) and banned all eight implicated players from baseball for life. You may even recall his famous quote on that occasion: "Regardless of the outcome of the juries, no player that throws a ball game, no man that entertains proposals or promises to throw a game, no player that sits in a conference with a bunch of crooked players where the ways and means of throwing games are discussed, and does not promptly tell his club about it, will ever again play professional baseball."

But was Judge Landis so tough on the Black Sox because he so hated gambling... or was his antipathy to the White Sox generally also involved?

Judge Landis was appointed to the United States District Court for the Northern District of Illinois by President Theodore Roosevelt in 1905. He had a talent for grabbing headlines by his rulings, but these did not always stand up to the test of appellate review. From Wikipedia:

In 1907, [Landis] presided over a Standard Oil antitrust trial fining them $29 million for accepting rail freight rebates, although the verdict was later set aside.

In 1918, he presided over the trial of over 100 members of the Industrial Workers of the World (including Big Bill Haywood) on the charge of violating (by hindering the draft) the Espionage Act of 1917. He also presided over the December 1918 trial of 5 prominent Socialist Party of America leaders, including Victor Berger, SPA Executive Secretary Adolph Germer, youth section leader William Kruse, and editor of the party's national newspaper J. Louis Engdahl. While Landis oversaw the convictions of many in these trials, imposing draconian verdicts, many of the verdicts were reversed on appeal or nullified by presidential pardon. The convictions were overturned because Landis had demonstrated his lack of impartiality; notably, Landis said during the trial that "If anybody has said anything worse about the Germans than I have, I would like to know it so I can use it." 255 U.S. 22 at 28.

Landis was also instrumental in getting African-American heavyweight champion Jack Johnson banned from the sport by charging him with transporting a white woman over state lines for prostitution.

And Landis was an open and notorious Cub fan. I remember reading once that Judge Landis was frequently AWOL from his courtroom, taking in Cub games at the West Side Grounds or, later, at Wrigley Field.

This morning, I looked online to see what corroboration, if any, existed for this recollection.

MLB.com says that Landis "often found time to attend games at both Comiskey Park and Wrigley Field in Chicago," but an unofficial Cub history website, JustOneBadCentury.com, asserts, "Landis was... a regular at West Side Grounds, home of the Chicago Cubs. He openly rooted for the Cubs against the White Sox in the 1906 World Series, something White Sox fans never forgot. When the Cubs moved to what is now Wrigley Field, he was a regular there as well."

Now... I don't pretend that this is anything close to authoritative proof... but isn't it interesting that the man who thundered so angrily against ballplayers who consorted with gamblers -- threatening to ban for life even a player who "sits in a conference with a bunch of crooked players where the ways and means of throwing games are discussed, and does not promptly tell his club about it" -- seems not to have investigated the rumors swirling around his beloved Cubs? Jury verdicts may not have been the only thing disregarded by Judge Landis in his handling of baseball's gambling crisis.

Joe Jackson, it is widely believed, knew about the fix and took the gamblers' money (it may have been thrown on the floor of his hotel room after he refused it); there is some evidence to support the claim that he tried to tell Charles Comiskey about the fix, but the Old Roman wouldn't see him. Jackson's so-called "confession" may have been procured following the liberal administration of whiskey by a White Sox team attorney, Alfred Austrian. Even so, Jackson arguably sat "in conference" with crooked players, but he did hit .375 in the 1919 Series, going 12 for 32 -- including three doubles and a homer -- going 5 for 12 with runners in scoring position. He scored five times, driving in six runs and committed no errors. (See, linked Wikipedia article; see also, Shoeless Joe Jackson's Virtual Hall of Fame.)

Would Judge Landis have been as stern and unyielding toward Jackson if he had worn Cubbie blue?
Posted by The Curmudgeon at 10:33 AM

Email ThisBlogThis!Share to TwitterShare to FacebookShare to Pinterest
Labels: History, The Sporting Life

since this was a sports post i didn't read it but i came by anyway...