Watching the Hawks bandwagon skate by

Bee, this another of those occasional sports posts. At this point, a Blackhawks post is just about mandatory.... 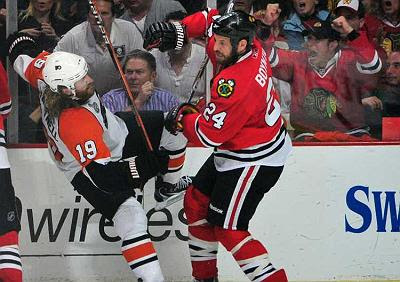 The Chicago Blackhawks are on the verge of winning their first Stanley Cup since 1961. All they have to do is win tomorrow night in Philadelphia (where they've not won since 1996) or Friday night, here, in Chicago.

There's tremendous enthusiasm for all things Blackhawk at the moment here in Chicago. City Hall and the County Building are festooned with Hawks flags; there are Hawks banners hanging on the streetlamps. The Chicago Tribune is publishing a special Hawks-only sports section; the tabloid Chicago Sun-Times (from which the accompanying photo was lifted) is running wraparound Hawks sections on and following game days. And the local "newscasts"? If you're a hockey fan, you're in hog heaven right about now -- but, if you're trying to find out what may be happening in the outside world, you have to pay careful attention. The actual news is doled out in eyedropper-sized doses in between extended Blackhawks features.

This blanket coverage is not limited to the local NBC affiliate either (NBC has most of the Stanley Cup games). All the stations are posting reporters in bars and outside the United Center, in nursing homes (these residents remember 1961 like it was yesterday! And that fella sitting quietly in the corner remembers 1938, too!), in nurseries (all the newborns are getting red blankets... or little hockey sticks... or something)-- any place where a hockey angle might be exploited.

A visitor planted in our midst might understandably assume that all of us are consumed with Blackhawk fever.

But I don't think I'm alone on this: I'm happy for the hockey fans, and I'm sure this is good for the city -- but I haven't become a hockey fan all of a sudden.

I never was a hockey fan.

When I was a kid (and the Blackhawks were good) I tried to become a hockey fan. I listened to radio broadcasts by Lloyd Pettit long enough to 'get' Bruce Wolf's later imitations -- but I never quite figured the game out.

I tried again in college. My school had a club hockey team and I went to a few of the games. I didn't understand it any better live and in person than I did over the radio.

That doesn't mean we haven't watched any hockey in the Curmudgeon home during these playoffs. Surprisingly, Long Suffering Spouse has wanted to see some of the games. The kids in her school were becoming increasingly enthusiastic as the Hawks went through the playoffs and she was curious to see what all the fuss was about.

A little hockey, though, goes a long way. "Don't they have any rules in this game?" she asked after watching a series of particularly violent collisions.

As near as I can tell, hockey is sort of like soccer -- another game I don't get -- only on skates and with sticks. I'll tell you how little I know about hockey: My wife asked me how many players were on each side, and I confidently answered "six" -- and quietly confirmed that fact with Wikipedia.

There are all sorts of people who are hockey fans today in Chicago who couldn't have cared less about hockey just a couple of years ago. For many of these people, "hockey puck" was just an insult wielded by Don Rickles. Blackhawks hockey was irrelevant in this town until Rocky Wirtz took over the team after his father's death in 2007. For a number of years, the minor league Chicago Wolves hockey team (affiliated with the NHL's Atlanta Thrashers) were arguably more popular than the Hawks. Not only were their tickets cheaper, their home games were available on cable -- the Blackhawks refused to allow telecasts of their home games until Rocky Wirtz took the helm of the franchise.

The Blackhawks story resonates because it is a story of new blood invigorating a moribund franchise, with exciting young athletes coming into full flower at exactly the right moment. The bandwagon is rolling.

But it's still hockey. I'm really much more concerned, even now, with the White Sox's erratic pitching and failure to get timely hits. Why is this team underperforming? But that's a different post.

So... I hope the Blackhawks get to hoist Lord Stanley's Cup. It'll be nice. I'll probably watch some of the game tomorrow and everything. But I'll not be trying to crowd onto the bandwagon.
Posted by The Curmudgeon at 8:37 AM

this is a sports post curmy, i knew that right off!