I saw a reference to the happy news for walruses in the June 7 issue of Newsweek. In the feature, "Black Water Rising," Evan Thomas and Daniel Stone wrote that, when the Deepwater Horizon went down and the oil started coming up, BP was asked to pull out its disaster plan:

The company did have a plan, titled "BP Regional Oil Spill Response Plan -- Gulf of Mexico," approved by the federal government. But on closer inspection, it was a pretty flimsy document. Rick Steiner, a marine biologist and former University of Alaska professor who has worked on numerous oil spills... points out that the plan discusses the need to protect walruses, seals and sea lions, animals that do not exist in the gulf, which strongly suggests a cut-and-paste-job. A Web address given for a response contractor's equipment list goes instead to a Japanese shopping site. The good ol' boys at the MMS [Minerals Management Service of the U.S. Department of the Interior] may not have been closely reading this plan when they signed off, suggests Steiner.

The AP has since expanded on the glaring deficiencies of the 582-page BP "plan." In an analysis published June 9 on the Christian Science Monitor website, the AP's Holbrook Mohr, Justin Pritchard, and Tamara Lush write:

Professor Peter Lutz is listed in BP's 2009 response plan for a Gulf of Mexico oil spill as a national wildlife expert. He died in 2005.

Under the heading "sensitive biological resources," the plan lists marine mammals including walruses, sea otters, sea lions and seals. None lives anywhere near the Gulf.

The names and phone numbers of several Texas A&M University marine life specialists are wrong. So are the numbers for marine mammal stranding network offices in Louisiana and Florida, which are no longer in service.

Read the entire article; it's enough to make anyone sick.

President Obama was quoted in the Newsweek article as decrying the "cozy relationship" between oil companies and Interior's MMS. In view of the government's "oversight" of the BP disaster plan, approved just last year, that seems a huge understatement.

Are we hiring poli sci majors to regulate petroleum engineers? Where are our in-house experts? When we speak of the revolving door between industry and government, are we taking only lobbyists in? Don't scientists ever come over as well?

Like all the oil companies, BP has made billions -- billions -- just in the past couple of years as gasoline prices soared to new heights. Weren't any of those profits reinvested in serious assessment of the responsibilities that BP and the other oil companies have taken on? -- have begged to take on?

We already have one prominent British businessman in the federal pen -- Conrad Black, or, if you must, Baron Black of Crossharbour. Can't we make room for Tony Hayward too? (And, yes, can we also cashier and, hopefully, prosecute the government bureaucrats responsible for approving Hayward's fraudulent disaster plan?) 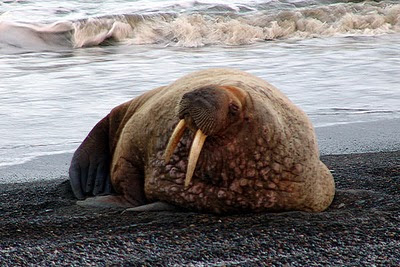 But blogging should not be all negative. That's the mainstream media's angle. The Blogosphere should be a happier place. So let's close with the same positive where we started, shall we?

Email ThisBlogThis!Share to TwitterShare to FacebookShare to Pinterest
Labels: Decline and Fall of Western Civilization, Enviromania, News and Views

A massive leak was always going to happen sooner or later.

To quote someone, "Damn, just damn."

Too bad there wasn't a more practical plan ready.

We all know there are no walruses in the Gulf. Although it was a mindless cut-and-paste action, the "walruses in the gulf" issue left some South Louisianians saddened that some people might really not know what animals are really being damaged down here. We put together this video to show them. http://www.thebananaplant.com/no-walruses-in-the-gulf.html