After Memorial Day in the U.S., many offices adopt a "Casual Friday" for the summer. The office dress code is loosened. Ties and jackets, for example, are discarded for "business casual."

Of course, like any good thing, Casual Fridays can be carried too far.

Just how far, however, I did not realize until this morning when I was on the Chicago Sun-Times website. I saw a tease for a story about "Naked Fridays at at work."

Always eager to learn and report on new social trends, and without any trace of prurient motive whatsoever, I clicked on the link above.

Apparently the web editor at the Sun-Times is a little backed up, because today's little gem actually appeared in Britain's Telegraph on July 2, 2009. The original article, by Ben Leach, describes the efforts of a "business psychologist" who persuaded the staff at a design and marketing firm in Newcastle upon Tyne "that a Naked Friday idea would boost their team spirit." 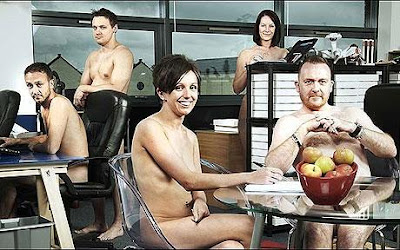 According to the article in the Telegraph, the business psychologist told the staff that "by stripping off their clothes, staff could also strip away inhibitions and talk to each other more openly and honestly."

You know, I may have tried similar lines once upon a time. Probably got slapped every time, too. But I was no doubt too far gone in drink to remember clearly.

Which is surely just as well.

Anyway, although I was surprised to see that the staff went along with this proposal (as the accompanying picture appears to confirm), I was less surprised when I read that the "experiment" had been "filmed for a one-off TV show, Naked Office" that was shown last year.

I hope our British readers can fill us in on how well the show did. Are sequels planned?

I was unable to find out whether the show will be screened on BBC America anytime soon.
Posted by The Curmudgeon at 10:53 AM

Email ThisBlogThis!Share to TwitterShare to FacebookShare to Pinterest
Labels: Decline and Fall of Western Civilization, Just for giggles

I still lived just outside Newcastle last July - this is the first time I've heard about this. The only public nudity in N/C I'd come across until today was the guy who gets loads of MOPs together and does a sort of collage. It's too cold there anyway - I could understand doing it under spotlights for filming!!!!

www.onebestway.com was the business that took part in this show and there's now a 6 part series on Virging 1 in the UK.

It's being shown for the first time around about now.

I'm the MD of onebestway and the experience was a mix of great PR and - believe it or not - great business improvement too.

If anyone would like any more information they can email me on mike@onebestway.com.