Seventy years ago today, the Wehrmacht blitzkrieged into Poland. You may find this article by British historian Andrew Roberts (obtained from the UK's Daily Telegraph) of interest. Roberts addresses why England delayed declaring war on Nazi Germany until September 3 despite its prior guarantee of Poland's borders. A brief excerpt:

It was true that Chamberlain and Halifax still hoped against hope (and rationality) that Hitler could be persuaded to withdraw from Poland once it was made clear to him that the Western Allies would stand by their guarantee. Because they would not be providing any material help to Poland, indeed the British Army only started crossing over to the Continent after 3 September, there seemed to them to be no particular hurry to declare war, since doing nothing to help immediately struck them as little different from doing equally little a few days later. Moreover, the French Government of Edouard Daladier seemed to be dragging its feet, and both Governments believed a simultaneous declaration would have a far better effect.

Nevertheless, Roberts posits that the main reason for the delay was an offer by Mussolini to host a peace conference. Roberts does not speculate on whether Mussolini's offer was genuine or just a cynical bid to gain time for his ally, Hitler, to subjugate the Poles. But there is no question that the British were eager to keep Mussolini on their side, or at least neutral, in the looming war. Churchill writes, in his memoir of World War II, about his efforts to court Mussolini.

And, speaking of Churchill, on a lighter note, today seems like a good day to recycle this photo I first found (and posted) in 2007: 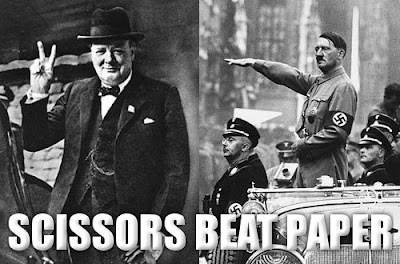 Originally Stumbled upon at this site.
Posted by The Curmudgeon at 9:23 AM

My father remembers it well...it was in all the papers.