At the Lincoln Library, transfixed by a pair of gloves

Yesterday I mentioned that the first of the three appellate briefs I will complete in a month's time was filed a week ago Friday. And so it was. But I was not there to file it.

Some weeks before, in a moment of weakness, I'd agreed to accompany Long Suffering Spouse on a field trip to Springfield....

The teachers at my wife's school decided not to ask parents to serve as chaperones for the middle school students' field trip this year. The teachers found that sometimes a parent would watch only his or her own child. And the other kids didn't listen to them. When they ran wild (the kids, not the adult chaperones), the parents seemed powerless to rein them in.

And then I found out that the buses were leaving the school parking lot at 5:45am on a Friday.

But I went ahead with the plan anyway and took my place in the convoy of three highway-style tour buses. My wife assigned me eight or nine kids to look after. The girls were fairly compliant, but one boy moved with exaggerated slowness and another moved like he was hopped up on uppers... so the group tended to space out as we went through New Salem.

After a while, I found out that I could holler at the kids and bring them back into line without much difficulty; the parent of a child in the class might have difficulty doing that. After all, s/he might fatally damage his or her child's social prospects for-ever.

But these were truly city kids.

On the bus on the way down, a kid saw animals grazing near the Interstate. "Horses!" he shouted. 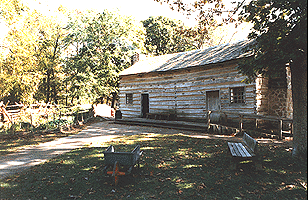 And, at New Salem, these sixth, seventh and eighth graders were far more interested in the cows and chickens and sheep than they were in the Rutledge Tavern or even in the legend of Ol' Abe's youthful infatuation with the ill-starred Ann Rutledge.

Some of the buildings had re-enactors available to talk about the history of their building and its occupants... and I gamely tried to engage them... and my charges. I had great conversations with the re-enactors. The kids drifted off in search of more animals.

But after New Salem it was time to visit the Abraham Lincoln Presidential Library. This had opened up in Springfield since I was last there and it was another powerful inducement for me to agree to make the trip.

By this time I had figured out how to keep my charges more together. And it was a more confined space so the straggler couldn't straggle as much... even though we had to more or less keep pace with Mr. Hopped Up. Still, I had the chance to catch their attention a couple of times. The group paused around an exhibit showing Willie Lincoln's deathbed. In a room dedicated to the Gettysburg Address, I discovered that not one of them could recite even part of it. Memorizing set pieces just isn't done these days, apparently.

But I stray, as I so often do, from the point, which is not about what the kids saw, or absorbed. 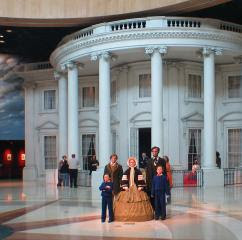 We finished our tour of the exhibits with some time to kill before heading into the gift shop. Long Suffering Spouse's group came up not too long after. She took pity on me. While she kept her group, and mine, occupied by taking photos with statues of the Lincoln family (the one place in the museum where photos are allowed), she let me sneak back and look at the exhibits for a few minutes on my own.

I wound up in the "Treasures" room. These were real Lincoln artifacts... one of his stovepipe hats, a lock of his hair. But I was drawn to a display of two gloves.

Lincoln, the accompanying sign said, often wore gloves when in public -- because all that handshaking and so forth was tough on his hands. I can imagine that he might have used them riding, too, since Lincoln often rode his own horse when in Washington. He kept one glove in each pocket of his suit coat.

Thus, one of the cream-colored gloves I was looking at seemed almost rust-stained, the other was not. One glove was in the pocket drenched in his blood after John Wilkes Booth shot him. The other was not.

I stood there for as long as I dared before rejoining the tour group.
Posted by The Curmudgeon at 8:32 AM

wow, the ending floored me! i was all set to say something flip like taking kids like that is like trying to herd cats but then i got all thinking at the end...

Wow. That gave me chills in a "I really need to go back and take another look at history now that I am beginning to understand the importance of it all" kind of way. Thanks for sharing!

why? one glove in his pocket and one not.. what are you thinking? tell the story.