Today, Barb has another timely Tuesday Heads or Tails: We are asked to write about "yellow" -- some of the leaves on the trees around here are turning that color even now. On September 1! Somebody seems to have smuggled Chicago to the Upper Peninsula of Michigan.

But I won't write about leaves this morning because I cheated and looked at Barb's post first. She often puts up a music video and her selection today was "Big Yellow Taxi" -- but not by Joni Mitchell. Her video is from some entity called "Counting Crows."

We can't count too many crows around here since the West Nile virus came through.

But I started thinking about the "yellow" songs Barb passed by.

The Yellow Rose of Texas. The Mitch Miller version is on my iPod. There goes my street cred.

Yellow Bird by the Arthur Lyman Group. Wikipedia says this was the only version of the song to chart in the U.S., reaching No. 4 in 1961. Now you remember why America was so ready for the British Invasion. And, speaking of which....

Yellow Submarine by the Beatles. 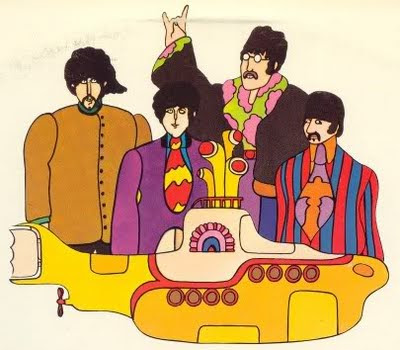 (Despite what it may look like, Wikipedia assures us that Peter Max had nothing to do with the artwork in the movie.)

Yellow River by Christie. (You'd remember it if you heard it.)

Not one but two songs from Donovan Leitch: Mellow Yellow, of course, but also Colours ("Yellow is the color of my true love's hair/In the morning, when we rise....")

And still one more, by the group "Yello." Herewith a medley of the group's greatest hit, "Oh Yeah," used to such great effect in 80s films such as The Secret of My Success and the late John Hughes' Ferris Bueller's Day Off. The video that follows shows neither of these, but may be the actual music video released with the record (kids, turn off MTV for a moment and find an adult to explain to you what a music video is was):

Posted by The Curmudgeon at 8:23 AM

Tons of yellow music to be heard. I'm still stuck on "The Wizard of Oz" from a blog I read earlier. Now you've given me more to get stuck on.

More great songs to get stuck in my head!