When should the law intervene to overrule parental decisions? 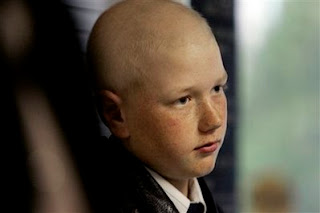 Another hard case that may make very bad law: The Daniel Hauser case, in Minnesota, gets sadder and stranger all the time.

AP reporter Amy Forliti writes this evening that Brown County District Judge John Rodenberg issued an arrest warrant today for Daniel's mother after she failed to show up for a scheduled hearing.

She was supposed to come to court today and tell the judge what oncologist she would take her son to. Instead, she's taken her son.

Daniel has Hodgkins lymphoma and, apparently, he has a very good chance to make a complete recovery if he accepts the chemotherapy treatment usually prescribed in these cases. But Daniel and his mother don't want that treatment. Daniel's mother wants the boy treated with "alternative medicines." Fioriti's article says that the family subscribes to the "'do no harm' philosophy of the Nemenhah Band, a Missouri-based religious group that believes in natural healing methods advocated by some American Indians." (The Hausers also claim to be Catholic.)

This is a heart-breaking case, even worse now that Colleen Hauser has apparently fled with her sick child. (However, Fioriti adds, Daniel's father has had a change of heart; he now agrees that the boy needs normal medical treatment.)

If this were my son, you'd bet I'd be moving heaven and earth to get him the best medical treatment available. And American courts have traditionally made special efforts to protect minors. Judge Rodenberg's efforts to get Daniel the help he needs surely seem within this tradition.

The court proposes to take this child from its parents in order to save him. (And even though Daniel apparently told Judge Rodenberg that, if anyone tried to force him to accept chemotherapy, "I'd fight it. I'd punch them and I'd kick them.")

What if, instead of refusing to provide cancer treatment, another set of parents allowed their kid to stay up all night whenever he wanted? I'm not talking about the kid being out in the streets or running with gangs -- I'm just talking about him staying up until 3:00 or 4:00 am every morning -- like my college students do all the time.

This would wreak havoc on a kid far younger than college age, especially if those same otherwise-indulgent parents made the child go to school each morning.

The teachers would complain that the kid was falling asleep in school and not learning as he should.

If one of them called the cops, would the courts be justified in taking that kid away?

If a child abuses drugs or alcohol, even under the family roof, the courts can intervene because that activity is illegal wherever it takes place. But what if another set of hypothetical parents allows their child to eat whatever food she wanted? Only legal foods -- mind you -- but lots and lots of food, to the point where the child is so grossly obese that the school authorities call the cops because, they say, the child's health has been jeopardized. Should the court intervene then? Do you want a court taking your child because you allow him or her 'unhealthy' foods like soda pop or chips?

Of course, courts intervene in child-rearing decisions all the time -- when the parents are divorced and don't agree. One wants the child to study the violin; the other wants the child to go wilderness camping. A court may have to decide whether the child engages in either activity. Or both.

But in this terrible, horrible Hauser case, the parents -- until now -- had presented a united front: They were treating their child their way. A stupid way, I believe, and one with potentially fatal consequences for Daniel... but where do we draw the line allowing courts to intervene? (I suspect that Daniel's father's apparent decision to support normal medical treatment probably gives the Minnesota court justification to do what it so desperately wants to do. If Daniel can be found.)

But what if Daniel's parents had maintained their united front?

The problem with freedom is that people must have the right to be wrong. Even dead wrong. When people aren't free to make dumb choices, at least in cases where they only hurt themselves, they aren't really free. The problem here is that the choices Colleen Hauser and, until just recently, Daniel's father were making were hurting their son, too.

If I were in Judge Rodenberg's place, I suppose I might have reached the same decisions as he has. It's impossible to say that for certain, however, based on media accounts alone.

But, I promise you, the decision would not have been easy: Allowing the State to interfere in a family's right to raise their child as the parents see fit should not be easy.
Posted by The Curmudgeon at 6:44 PM

law may intervene family matters on a case to case basis but not to all circumstances. with this situation, we are already talking about the life of the boy. i am also a mom and i know how it feels if my child is in grave danger. i don't understand why the mother wouldn't want his son to be recovered from illness in a faster way. i am not against herbal medicine because i also used it when my kids are sick but with cancer i don't think natural healing may help. there is a proper way of treating it. The mom of the boy may have a lot of reasons to her act but we'll just hope and pray that it will benefit the boy and will save him.