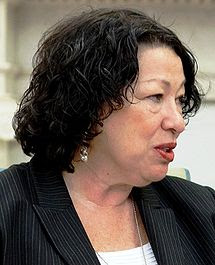 That's what our friends on the Right are shouting this morning: Second Circuit Judge Sonia Sotomayor is a (gasp) judicial activist!

Meanwhile, our brothers and sisters on the Left see in Judge Sotomayor a powerful symbol of ethnic empowerment: If confirmed, Sotomayor would become the first Hispanic on the Supreme Court.

The first, that is, except, perhaps, for Benjamin Cardozo, whose Jewish ancestors were probably driven out of Portugal... winding up, via Holland, in America... before the Revolution.

Judge Sotomayor, you will hear repeatedly in the coming weeks and months, grew up poor in the Bronx, raised by her mother after her father died when she was only nine years old. Her personal story is a powerful example of the American Dream, still working. I'll bet even Fox News concedes that point.

Judge Sotomayor graduated from the Bronx to Princeton, and thence to Yale Law School, where she was an editor of the Law Review. (In a lot of schools, if a kid 'makes' law review, he or she is automatically an 'editor.' It does not mean that she was necessarily telling the law professors submitting articles how to correct their punctuation. You will be entirely unsurprised to learn that I have no first-hand knowledge of how things work at Yale.)

The good news, I suppose, is that Sotomayor didn't clerk for another Supreme Court Justice before donning judicial robes herself. Instead, after finishing at Yale in 1979, she went to work in the New York County District Attorney's office for roughly five years. Wikipedia says that, while in the D.A.'s office, Sotomayor "prosecuted robberies, assaults, murders, police brutality, and child pornography cases."

Maybe D.A.'s rise faster in New York than in Chicago: Here it might be expected for a talented lawyer in our State's Attorney's Office to make it to a felony courtroom in five years... but not as the first chair. I wonder how much actual trial experience she has....

Sotomayor stayed in the D.A.'s office for five years. She then moved on to the private sector -- again, this is something of an improvement over recent SCOTUS nominees in that she has drawn a private sector salary for at least a brief interval.

Wikipedia tells us that, in 1984, Sotomayor went to Pavia & Harcourt. That's a link to the firm's current website. There, you will find the firm describing itself as "a business law firm, concentrating in commercial and corporate law, banking, media and entertainment, real estate, litigation and arbitration, intellectual property, estate planning and administration, and immigration services." The firm boasts having lawyers fluent in Italian, French, Portuguese and Spanish, providing "a full range of legal services to companies, individuals, and Italian and French governmental organizations and agencies."

But Sotomayor stayed there only six years, making partner at some point during this time. In late 1991, Sotomayor was nominated by President George H.W. Bush to a vacancy in the Southern District of New York. At the time, Sotomayor was the youngest federal judge in the district and the first Hispanic federal judge to serve in New York State. (If you insist on bringing up Cardozo again, remember he was a state court judge until he joined the U.S. Supreme Court.) President Clinton nominated Sotomayor to the seat she now holds in 1997.

Judge Sotomayor was married briefly, shortly after finishing college. The marriage ended in 1983 and produced no children.

Let's add this up, shall we? Including the better part of a year that it took to get her confirmed to the District Court, Sotomayor was a practicing lawyer for 12 or 13 years. At best, only 7 or 8 of those years were in the private sector. She's been on the bench for the last 17.

If we're going to put people on the Supreme Court because of their compelling personal stories, Judge Sotomayor's mother, Celina, might have made a better candidate: Widowed at a young age, she not only raised her daughter to become a federal jurist, she got her son through medical school.

President Obama said he wanted his justices of the Supreme Court to have 'empathy.' Empathy is the ability to imagine one's self in the other guy's shoes. It doesn't mean identifying with, or sympathizing with a group or with "The People" in the abstract. An empathetic person who says, "I know how you feel," probably does. Empathy doesn't come from imagination alone; it comes from shared experience.

Clearly, Judge Sotomayor has faced down some significant challenges in her life: She has Type I diabetes. She lost her father at a young age. But does she have enough experience of the real world? Or is she just another judicial careerist with an Ivy League resume? And haven't we had enough of that?
Posted by The Curmudgeon at 8:45 AM

Email ThisBlogThis!Share to TwitterShare to FacebookShare to Pinterest
Labels: Immigration, News and Views, Roadkill -- politics in the middle of the road

i told sarge to read this post. you nailed it curmy! he sent it to rush, hope you don't mind. he loved it!

Yesterday, my husband was looking here to see if and when you would write something on this lady judge.