May Day thoughts on revolution

The American Revolution is sometimes referred to as a "conservative" revolution.

It was pretty darn radical to even think of sloughing off a King and to take up arms against the mightiest army in the world.

And yet -- though a great many Americans did die at the hands of their own countrymen -- their own neighbors (the Revolution being also a civil war) -- our Revolution never degenerated into the carnage and bloodbath that consumed the French.

Because our Founding Fathers had real, practical experience of government. Many -- most -- had meaningful legislative experience. They had already helped run this country for their absentee landlord King. 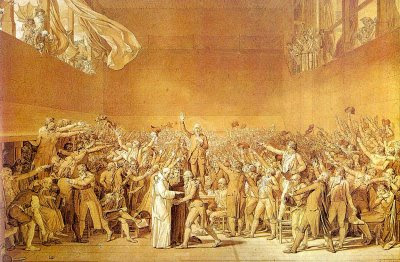 The French had nothing comparable. They had only theory. Ideology. And reliance on reason alone, unalloyed by experience, led them from the Tennis Court to the Terror.

So... why the history lesson?

Because in our increasingly partisan society, the debate is being framed by ideologues. People with practical experience are shoved aside. Who cares what law enforcement professionals or career military officers think? Some Ivy League law grads think waterboarding is just swell, thanks, and will produce all sorts or reliable information. So bring on the contractors!

Sure, government ownership of industry has led only to sloth and waste everywhere else in the world. But we have professors who've figured out how our government can own things without ruining them. (They probably sat next to the kids who dreamed up credit default swaps in MBA school.) Who cares what experience has shown about government health care in Canada? In Europe? We'll do it right because we have serious academics dreaming up our national health system!

We need reason and experience to be our guides, thank you, and when they point us in different directions... lean a little on the side of experience, please.
Posted by The Curmudgeon at 11:58 AM

curmy i fear for us. this country is so divided down the middle i don't think we can ever come together without another huge event like 911. it almost reminds me of sherman burning atlanta. *shudder*

People are so divided...no middle ground.