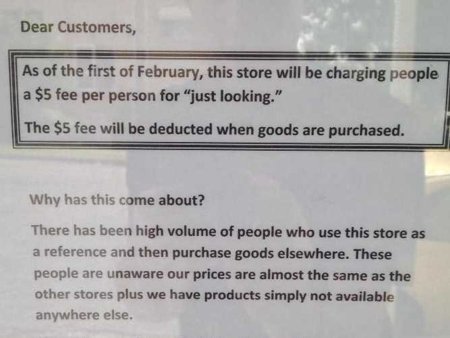 I saw this Business Insider story, by Kim Bhasin, on Yahoo! Finance yesterday afternoon. It seems a store in Brisbane, Australia is charging a A$5 "just looking" fee to browsers in the store; the fee is refundable, the sign promises, as a credit toward purchases actually made.

The most surprising part of this story, for me at least, was that the store in question was "a specialty food store."

I would have guessed an electronics store, on the order of Best Buy or H.H. Gregg.

The Australian store owner is being vilified across the Intertubes these last couple of days as the above photo has seeped from Reddit into the main swirls and eddys of the Ether.

I sympathize with the shop owner. Yes, it's a dumb solution -- but it's a real problem.

People take their smart-alec phones into a store and compare the goods there on offer with comparable goods displayed by their phones. Buyers can't touch and feel and poke and prod the latest and greatest electronic gizmo touted on Amazon, but they can see it and smell it and heft it at Best Buy. Best Buy pays rent, property taxes, and a bunch of salespeople in polo shirts. It collects sales tax on purchases, not for its own enrichment, but for the state and local governments that impose the tax. Amazon generally refuses to collect sales taxes, and gets away with it in most places. In Cook County, Illinois, therefore, Amazon starts with a 10% price advantage over the 'big box' store. (Buyers are supposed to calculate the 'use' tax instead of -- but which comes to the same thing as -- a sales tax and forward it to the State of Illinois -- and they very seldom do.)

The consumer saves a few bucks and another few of his neighbors are laid off as the big box store slides into bankruptcy.

What a gimmick. Book stores and electronics stores are on life support; Amazon is thriving. Local governments are running deficits and the Never-Ending-Recession keeps going a little longer.

Maybe it could work in Australia -- but here in the sad old U.S.A., a "just looking" fee will never do anything but fuel the resentment of potential store customers. The competitive disadvantage in favor of Amazon and other giant online retailers can only be cured by government action: They have to be made to collect the same sales tax as brick-and-mortar stores in the area where the customer lives.

If there were a Main Street Party in this country, this would be a big, big issue for them. But there isn't. There is only a Big Government Party and a Big Business Party.
Posted by The Curmudgeon at 9:16 AM