Are bars of soap now an endangered species? 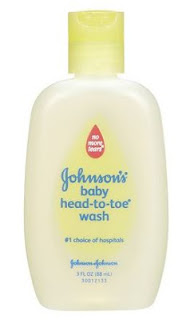 I saw a bottle very much like this on the counter in the bathroom on Friday morning. (It may have been there for days... or weeks... but that's when I saw it.)

I had no idea they now sell "body wash" for babies.

I know "body washes" are increasingly popular for men and women. I don't understand why.

Here is the power of advertising on overdrive: The young people have been seduced into believing that shampoo is better than soap. It certainly is more expensive.

Advertising is an amazing thing. In the early 1970s no manly man would be caught dead drinking Lite Beer. Then Bob Uecker and many other retired jocks were recruited to do funny ads for the product -- and the stigma was removed. (Dr. Pepper is trying to replicate this phenomenon with diet soda -- a 10 calorie drink in a powder blue can. Dr. Pepper and its ad agency are not using ex-athletes but they are trying to portray the product as for men only. I can't believe it will work -- but you never know....)

Remember when no self-respecting male would wear perfume? English Leather made a bid for the market in the 1960s with the tag line, delivered by a voluptuous blonde -- 'all my men wear English Leather, or they don't wear anything at all.' It didn't really work: This appeared to be an either-or choice -- and most men watching would have gladly chosen the latter over the former. Meanwhile, the woman in question, for obvious economic reasons, preferred the former over the latter. This created conflict. But in recent years, a truly stinky product called Axe has made obscene profits by running nearly obscene commercials, showing women who can't help but tear at the clothes of any male daring enough to put the product on. (See the difference? Men use the product and then they still get to wear nothing at all in the company of similarly inclined women. Conflict resolved: Win-win.) The product certainly made an impression on my muy macho, athletic sons. They'd go out on a Saturday evening so thoroughly doused in the stuff that they left clouds of opaque vapor behind them. It made the once-celebrated L.A. smog look transparent by comparison.


I'd tell the kids that they could knock a buzzard off a sh*twagon with that stink, and they'd just favor me with a patronizing look -- you know, the look that says, you're old, Dad, but you're amusing in your antique way. Eyes watering, gagging on the stench, I'd try to tell them not to stay out too late. Who knows? Maybe the girls watched the same commercials and thought that was how they were supposed to behave. Maybe tearing off the boy's clothes would help dissipate the odor.... In order to find out whether this might be the case, I suppose I might have tried the spray -- at least once -- if I was their age (in a sense of strictly scientific inquiry, you understand).

But what's the attraction of "body wash" over bar soap? It leaves the bathtub slippery and seems to slow the drain. All that residue on the porcelain and in the plumbing suggests that plenty would be left on the skin as well. Why would anyone use a product that costs more than soap but doesn't get one as clean? I'd ask my granddaughter why she's using the 'head to toe' baby wash, but she doesn't talk yet. But she will eventually. And who knows what products she will demand of her parents then?
Posted by The Curmudgeon at 12:30 AM

i simply cannot STAND any perfume of any kind, men or woman! nope. and i use ivory bar soap, it's the very best, smells clean. period.

good posting. but would u want to touch a bar of soap that someone else touched if u were concerned about getting germs?

Larry... isn't the soap supposed to wash away the germs?