This link to Yahoo! Travel will get you the Reuters article. Reuters, in turn, lays the blame for this list on an outfit called Virtual Tourist. I can neither confirm nor deny this assertion. I noodled around the Virtual Tourist site for awhile this morning and could not find the source list. But that's not to say that it's not there: The British press might hack your cellphone, but they wouldn't make up a list like this... would they? I figure it's more probable that my Internet skills have rapidly deteriorated in this now 9 days and counting of no office Internet.

But back to our story.

Two of the pieces of public art on the aforementioned list are situated right here in Chicago. One is temporary; the other is a permanent blot on the landscape.

The temporary piece is the Marilyn sculpture on North Michigan Avenue, in Pioneer Court, just south of the Tribune Tower. 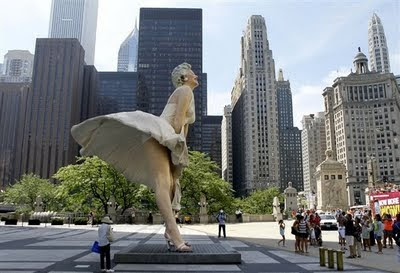 My readers are likely to remember the inspiration for this statue, namely, Marilyn's performance, opposite rodent-faced Tom Ewell, in the Billy Wilder comedy, The Seven Year Itch.

This statue was put on display quite recently and has been controversial from the start. A few days back, your crusty correspondent decided to wander over to the North Bridge area to see for himself what all the fuss was about. (It's a healthy walk from the Undisclosed Location, but I will bear any burden for the sake of a possible post.)

Having now seen for myself, I can truthfully report that the statue rather creeps me out. As Tribune columnist Mary Schmich wrote in a July 15 column, "The original image is coy. Marilyn on the Mag Mile is crude."

It is all a matter of scale. In the movie, Tom Ewell can almost see what he should not; in the posters, we see only a glimpse. But when Marilyn is 26 feet tall, we get this sort of thing: 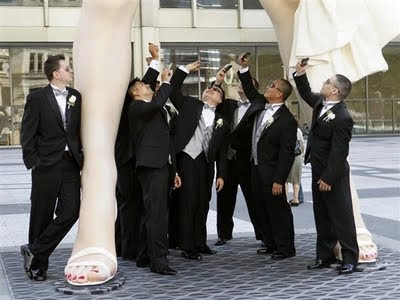 Our other nominee for most ugly piece of public art is not going away any time soon. It is called "Monument with Standing Beast," something I never knew before the Reuters article (and something I am likely to forget shortly after I publish this post), even though I walk past this thing almost every day.

This piece is located on the plaza outside the State of Illinois Building, 100 W. Randolph, kitty corner from the Daley Center, at the northwest corner of Clark and Randolph.

I can't say I share the strongly negative views reported in the Reuters article ("This ten-tonne behemoth is said to represent an animal, a portal, a tree, and an architectural form, but to some it just represents bad taste"). But I would believe it if you told me that this piece arose from a misunderstanding. I can just see Helmut Jahn, the architect of the State of Illinois building, displaying a three dimensional model of the building he had yet to build. I can see him crumpling up a piece of paper, putting it on the southeast corner of his model and saying, yes, we should have a work of public art there -- and, somehow, that crumpled piece of paper was mistaken for the design of the piece to be placed there. You be the judge. 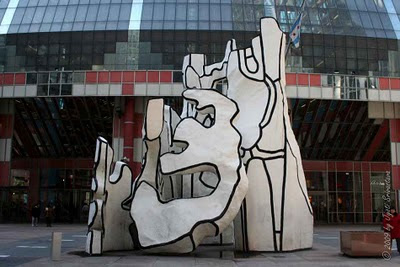 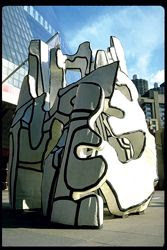 I think my explanation is as plausible as any other. Do you?

Posted by The Curmudgeon at 8:09 AM

it's a shame about the marilyn statue being "over the top" so to speak, otherwise it's pretty good, just way too big! the other one? you're right...

curmy if you want to pick out something for lss in the shop i'd be honored to send it to you. you can tell her it's a christmas gift or whatever... really!

I've seen worse that the Masrilyn statue. It should have been life-size.