On the occasion of Mr. Buehrle's departure? 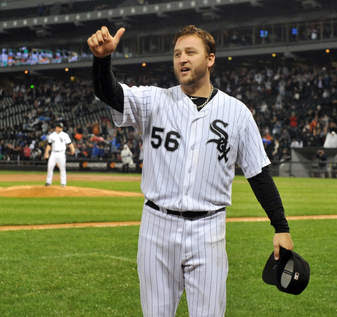 (Photo obtained from the Chicago Sun-Times)
I hope that Buehrle's not gone -- please understand -- but I'm very much afraid that Adam Dunn and Alex Rios have sucked up all the money that should have been available for Mark Buehrle's new contract with the White Sox.

If he is gone, it seems appropriate to recall some of Buehrle's White Sox career highlights. There have been many. I didn't watch his perfect game live -- it was a day game and, believe it or not, I was at the Undisclosed Location, working diligently at my desk.

Well... not really working. Long Suffering Spouse was relaying the play-by-play over the phone during the last couple of innings. People who don't live in big cities may not realize it, but we can't get an AM signal in any of the skyscrapers downtown -- so we can't listen to the ballgame on the radio at work.

Anyway, the perfecto was Buehrle's second no hitter. Second Effort covered the first. From April 19, 2007, here's an excerpt from "Buerhle's doing very well tonight, isn't he?" (and, yes, that link will take you to the complete post):

That's what Long Suffering Spouse said when the line score came up as the Sox broadcast went into a commercial break.

And I hadn't noticed.

I'd gotten home late and didn't turn on the game until the 5th inning -- in time to see Jermaine Dye's grand slam. Dye's been hitting poorly of late and Youngest Son was threatening to cut Dye from his fantasy team. (Yeah, that'll teach him.) When Dye hit the home run I wondered if Youngest Son had made good on this threat -- making a mental note to tell him to cut all the White Sox from his team if he had. We could use the offense.

So I did not notice just how well Buehrle was doing -- until Long Suffering Spouse pointed it out.

Without saying any more than I've already said she said, of course. Because even in our den we might jinx it.

So we said nothing -- and, for that reason alone, no doubt, Buehrle was able to accomplish the near-impossible.

Actually, Buehrle was doing his best, that night, to jinx himself. While the other players shunned him in the dugout, in keeping with the best traditions of baseball, lest they disrupt whatever magic he had channeled into, he would sidle up to a group of teammates and say, "Did you know I'm throwing a no-hitter?" He did stuff like that all night. And he completed the no-no anyway. He must have been channeling contrary karma that night.

Anyway, Buerhle has long been one of my favorites -- long a favorite of most Sox fans -- maybe not of the beer vendors, since he works so quickly and his games tend to be a lot shorter than most -- and, if Buerhle has to go, I hope he knows he'll be sorely missed.

I can't understand why anyone would voluntarily go work for Jeffrey Loria. Joe Girardi managed the Marlins in 2006, was named the NL Manager of the Year, and was fired. From Wikipedia:

Girardi was nearly fired in early August when he got into a vocal (and visible) argument with Marlins owner Jeffrey Loria during a game. According to witnesses and video footage, the Marlins owner was heckling homeplate umpire Larry Vanover. When the umpire warned Girardi about the harassment, Girardi and his bench coach Gary Tuck then turned to Loria and told him to stop. Loria had to be talked out of firing Girardi immediately after the game.

On October 3, 2006, the Marlins announced that they had fired Girardi, despite him winning manager of the year. Girardi said only that he appreciated the opportunity to manage the club, a move that was seen as classy across the Major Leagues and kept him at the top of many teams' list of manager candidates.

Girardi has done well since, of course. Then again, he was smart enough to use the Cubs' managerial vacancy last year as leverage for a contract extension with the Yankees. He didn't push his way out of New York because there might be more dough in Chicago.

Things were not ideal for Ozzie in Chicago the last couple of years. If his kids didn't cause the rift with Guillen's boss, Sox GM Kenny Williams, they sure exposed it. Ozzie was expected to win it all this year, but Adam Dunn was a huge disappointment. Dunn was supposed to drive in runs. But by mid-season, fans reckoned a Dunn at-bat successful if he merely struck out and did not hit into a double play. Alex Rios was a hazard to navigation in the outfield and spent much of the year with his batting average hovering near the Mendoza line. And Rios' batting average looked good compared to Dunn's. Gordon Beckham regressed at the plate. I could go on... but this is painful.

Ozzie was underpaid in Chicago -- managers with far less seniority were making far more than he was here. And he wasn't the one who put Dunn and Rios in uniform. And he'll get a lot more money in Miami... but at what cost? Ozzie may soon regret that he pushed his way out of town.

Still, the football post should be next. I don't know that I'll get it done by the end of the week, however. I'm on trial Friday supposedly and I have stuff to do in anticipation of same.
Posted by The Curmudgeon at 4:37 PM

You have failed to mention that this is a glorious day for Cub's fans! The Red Sox have now displaced the '69 Cubs as the worst collapse in history.

The Red Sox' failure this year was epic -- but aren't you giving too much credit to the 1969 Cubs (too much reverse credit?) -- after all, the 1964 Phillies were in first place by six-and-a-half with 12 games to play. They didn't fall as many games in the standings as the '69 Cubs because the Phillies finished one out, while the Cubs wound up eight games behind. But does it really matter how far 'neath the surface that you sink? Aren't you drowned anyway?

But the Cards were actually a team with a winning tradition. Up to that point the Mets had been a total joke.

Anyways, see this: (sorry about the pay wall)

I read the article. Or tried to. I have to confess that I've never mastered statistics.

But I'll defer to the expert.

There was a joke told about the Red Sox when I was a kid which went something like this:

Did you hear the Red Sox are moving to the Philippines?

Yes, they're changing their name to the Manilla Folders.