Living in New Chicago... Day One

Richard J. Daley was Mayor of the City of Chicago when I was born. Dat's Da Mare, on the left, or, if you must, over by dere. Saying "Da Mare" or "Da Late Mare" can only refer to Chicago's Richard I.

I was at a prayer breakfast with Da Mare in December 1976, shortly before he died. (He died, you may recall, in his doctor's office. He dropped dead, the story goes, moments after being pronounced perfectly fit. Who would tell Himself different?)

But many people also knew, then, that there would be another Daley on the throne soon enough. "Little Richie," as he was then known, was safely installed in the State Senate at the time. While some people thought that Little Richie would be neutralized by the loss of his famous father, others saw the appointment of another Bridgeport native, Michael Bilandic, as more or less a regency.

And then it snowed.

When the Blizzard of 1979 melted, Jane Byrne was mayor and Michael Bilandic had to go over to the Appellate Court (and later the Supreme Court) to support his family. (He'd married late in life.) 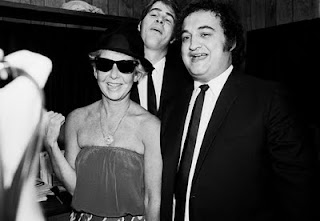 Jane Byrne let The Blues Brothers be filmed in Chicago and gave us Chicagofest at Navy Pier... which has led to Taste of Chicago, all sorts of other various fests, and the renovation of Navy Pier. Our tourist industry owes a lot to Janie.

But she was... erratic... and she lasted only one term. Little Richie thought it was time for him to take the reins in 1983; that probably would have been the plan had Bilandic been reelected. But Janie didn't go quietly and she and Richie were both defeated in the primary by a Congressman from Chicago's South Side.

I refer to Harold Washington. Harold (he seemed to prefer being called by his first name) did a stretch in jail once for failing to file federal tax returns. His birthday was April 15. 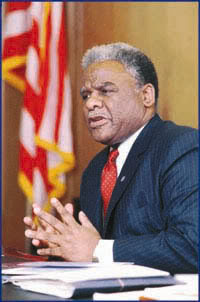 Harold presided over a contentious City Council. The media called it "Council Wars." Chicago was called "Beirut on the Lake" in those days. But Harold did something Michael Bilandic and Jane Byrne couldn't do: He got reelected.

Then he, too, dropped dead.

David Orr -- now Cook County Clerk, but then the Alderman of the 49th Ward -- became acting mayor for six days before giving way to Alderman Eugene Sawyer. In 1989, Sawyer faced the voters -- and Richie Daley -- in the primary. You know the rest. Richard II would rule Chicago for the next 22 years.

Rahm Emanuel was sworn in yesterday as Mayor of the City of Chicago. There's talk, of course, that he's just a creature of the same Machine that spawned the Daleys; that he is indeed the Daleys' instrument; that he will serve only so long as it takes for Nora Daley Conroy, a daughter of Richard II, to be ready to take over the family business. On the other hand, there's also talk that Rahm's a real reformer and people who figured he was kidding will be pleasantly... or quite unpleasantly... surprised. Some believe Rahm knows the ways of power so well that he can root out entrenched, systemic corruption and install an efficient, cost-effective municipal government.

I am no prophet. I know that there's been a Daley on the fifth floor at City Hall for over three quarters of my life. If there really is another Daley waiting in the wings, he or she has not been publicly groomed for the office. So I think the day of the Daleys may be done here.

I know the City is in a bad way financially. All local governments have been hurting in this interminable recession, but Chicago is hurting more than most. I don't know why any honest person would want to be mayor at this time. Still, if Rahm's really on the level, I wish him only the best.

But, even though I'm from Chicago, not from Missouri, he's still going to have to show me.
Posted by The Curmudgeon at 9:27 AM

Great write up. Hope you enjoy Chicago as much as I do