I don't know whether the Rapture will take place tomorrow as promised by Harold Camping, but I was definitely Left Behind by yesterday's LinkedIn IPO. 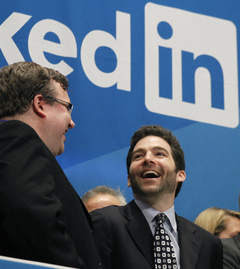 The fellow on the left is Reid Hoffman, the founder of LinkedIn; the fellow on the right is Jeff Weiner, LinkedIn's CEO. Mr. Weiner will presumably now be able to afford a decent shave, because, as I read in today's Chicago Sun-Times (from which the image is also taken), LinkedIn stock debuted yesterday on the New York Stock Exchange at $45 a share, soaring to $122.70 on frantic trading before closing at $94.25.

What is LinkedIn, you ask? Me too.

The linked article says that LinkedIn is a "trailblazer in the online networking craze." I haven't the foggiest notion as to what that might mean.

I've received invitations from people, from time to time, some of whom I actually have met, asking me to join -- or, as the gender neutral, automated email puts it -- "to become part of his or her professional network at LinkedIn." I don't know any of these individuals well enough, however, to ask just exactly what the heck LinkedIn is or is supposed to do.

Welcome to 21st Century America. We make "networks" that "link" people or businesses or sandwiches or coupons. These entities have weird names that trample accepted rules of spelling or punctuation. But, beyond that, exactly how do they innovate? For anything tangible, we still have to buy from the Chinese.
Posted by The Curmudgeon at 8:52 AM

me too curmy, several people keep sending me links to join this but i never did. d#1 uses is though and seems to like it. me? too old for anything else, my brain is FULL!

No rapture this time, it seems!