The headline on the Chicago Tribune website is "TV reporter says she was 'uncomfortable' at Jets practice; NFL, team investigating."

The reference is to the alleged discomfort sustained by Mexican TV reporter Ines Sainz while attending a practice session of the New York football Jets. Here is a picture of said television reporter. While this photograph was apparently taken on a different occasion, no less an authority than Ms. Sainz herself says (if my rudimentary Spanish translation is correct) says she was dressed just like this for Jets practice: 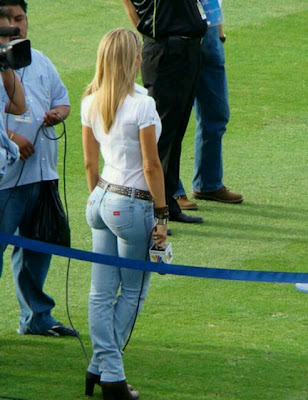 Carefully viewing this photograph (making the kind of sacrifice that you've no doubt come to expect as routine here at Second Effort), a thought occurs to me: Ms. Sainz's discomfort may have been caused by constricted bloodflow.

Of course, some of the Jets players and coaches may also have acted like goofs.

This could be one of those chicken-and-egg problems, wouldn't it?
Posted by The Curmudgeon at 7:10 AM

Email ThisBlogThis!Share to TwitterShare to FacebookShare to Pinterest
Labels: Just for giggles, News and Views, The Sporting Life

She is obviously flaunting her best assets, good for her.

things that make you go, hmmm.