Apple TV vs. Google TV? Still more I don't get 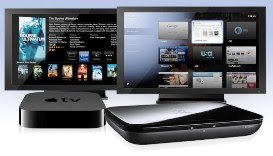 Being a dinosaur is getting harder and harder.

I read an article on Yahoo! today concerning the anticipated differences between "Apple TV" and "Google TV." The differences are "anticipated" at this point because neither of these wondrous devices has yet been placed before an expectant public.

But both, apparently, will be in the stores soon, there to taunt me.

There's one thing I understand though: The linked article refers to "set-top" boxes. Obviously, then, both devices are doomed to failure: You can't put anything on top of these razor thin TV screens these days.

Right now, in the Curmudgeon house, we're having a crisis because none of our remotes feel like changing the channels on the cable box. Not, at least, without extraordinary difficulty. The cable box lets you change one channel at a time (I found where -- I was so proud) but that makes it hard to change between Turner Classic Movies (Channel 501) and Comcast SportsNet (Channel 200). If those are the only two channels I want to watch, the "last" button on the remotes still work -- but I sometimes want to know what's on History International or the Science Channel or Retroplex. Youngest Son wants to browse the entire family of ESPN networks. And what about when it's time for the local news?

And don't tell me to change batteries. I thought of that one, too... eventually. And it didn't work. I've tried looking for schmeres on the cable box, something that's partially blocking the infrared (if that's what it is) receptor -- but I found nothing.

It's something wrong with the cable box. It's a new box, too, because after a recent storm downed wires in the area and our "On Demand" stopped working, the cable guy swapped out our old box (with hours and hours of saved Jack Benny programs that no one in my family will watch with me) and put in this now-flawed device. And Comcast charged me another $30-something for the privilege, too, even though it was their equipment that failed to work. Cable costs too darn much as it is without letting these robber barons add spurious charges on the bill.

When Long Suffering Spouse called to complain, she was told, in no uncertain terms by a very imperious customer disservice representative, that her computer screen insisted that it was our wires that were at fault. What wires? We have no wires that aren't from the cable company. I was going to write a nut letter to Comcast -- only to find out that there is apparently no way to determine who is the president of the subsidiary company responsible for our area. There are a million and one Comcast entities... and the number, apparently, is growing... to Xfinity. (Sorry. I couldn't resist that one.)

Anyway, anything that puts a crimp in Comcast's monopoly sounds like a good thing to me, even if I don't understand any of it. Except for the part about "set-top" boxes. Apple and Google are definitely going to have to rethink that if they want to succeed.
Posted by The Curmudgeon at 9:10 AM

Depending on trees, get Dish or Direct. Other than that, sorry. Though, Comcast has replaced two boxes for me at no cost. Oh, and they go below the TV now that the TV is skinny. But you knew that.

This is news to me too. As an Apple fan I shall be trying one of their TVs if I get the chance.