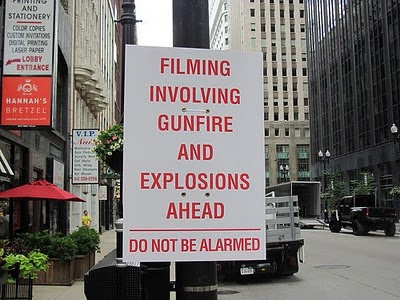 (Photo obtained from this site.)
So far.

Yes, it's Sunday and I'm here at the Undisclosed Location, the street in front of my building having been closed off to facilitate the filing of Transformers 3.

A block west of here there are some giant prop boulders suggesting torn-up pavement. There's a truck parked in the middle of it. It is tilting suggestively. One guesses the occupants of said truck did not fare well in the shooting script. The scene reminds us that, apparently, not everything can be done, even in this modern age, with CGI.

The picture with this post is from a different, though nearby, street, Washington Street, looking east from Wells towards LaSalle. I assume that the photo was taken yesterday. I haven't heard any explosions or anything like that this morning, even though I've cranked a couple of windows open here (no A/C here on Sunday).

I don't think I'm in any great danger of getting stomped on by a giant metal robot that can disguise itself as a truck: My Undisclosed Location probably isn't recognizable at all as a Chicago office building to anyone from out of town. What's the point in destroying such a building? I think the filmmakers prefer landmark-type buildings that moviegoers can readily identify. Thus (as I was reading just the other day), the Great Pyramid of Khufu has been "destroyed" several times now in various movies.

You know, I was raised thinking that the Great Pyramid was the Great Pyramid of Cheops -- and I just had to look that up now to find out why. It turns out that the Cheops was how the Greeks referred to the old fella. The name stuck for centuries... but fashions change.

I came here this morning to clean off my desk and I should be about that task. Assuming no Transformers demolish my building overnight, that should give me a leg up as the week begins....
Posted by The Curmudgeon at 10:20 AM

but there you sit, on a sunday, blogging! ha ha ha

An interesting fact about the pyramid. Keep an eye on those cars...are they really cars?