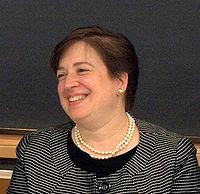 Oddly enough, no one's asked me about it, but I'll tell you anyway: There are some good things to say about the nomination of former University of Chicago Law Professor (and current Solicitor General) Elena Kagan to replace John Paul Stevens on the Supreme Court of the United States.

All the pundits are trying to get a handle on Ms. Kagan's politics -- and how she will 'move' the Supreme Court during what should be, given her relative youth (she's 50), a long tenure. Early in her career, she clerked for Thurgood Marshall and, before that, for former North Shore Congressman (and then-D.C. Circuit Judge) Abner Mikva. Judge Mikva is among those few generally given credit for launching Barack Obama on his meteoric rise; I'd not be surprised if Judge Mikva spoke with the President about (and endorsed) this appointment.

But she's Establishment, too: I rather doubt that there have been many wild-eyed crazies who have served as Dean of the Harvard Law School.

Most important, though, from my standpoint: She's never been a judge. Not since William Rehnquist has someone joined the Supreme Court bench without sitting as a judge somewhere else.

This kind of diversity has to be good for the Court.

Obviously, Kagan has lived in some cloisters of her own -- a rarefied government circle, as Solicitor General and a number of appointments in the Clinton White House before that -- and, of course, in the Ivory Tower of Academia. But... at least... these are different cloisters than the circuit bench.

That's progress, of a sort.

Republicans are fulminating about this: There's no record of how she has ruled in prior cases to predict how she might rule in the future. And Kagan is drawing flak for writing an article, 15 years ago or so, in which she criticized the Supreme Court confirmation process as vacuous, farcical and devoid of substance.

Kagan's confirmation hearing will be no different -- not if she is to be seated. Grandstanding Senators from both parties will demand that Kagan commit herself on abortion, gay rights, and the proper reach of executive power. Some idiot will undoubtedly ask for her opinion on Obama Care. Were she ever to answer such loaded questions, she would be committed, not confirmed.

I assume that Ms. Kagan will be confirmed. And it may be a good thing for the Court to finally get the viewpoint of someone who has not been a career jurist.

Now, if we could just break away from the Ivy League... maybe get someone who's sat in Congress... someone who's excelled in the private sector. Maybe then Supreme Court opinions could be useful to practitioners -- and not wannabe law review articles that raise more questions than they settle.

I agree that confirmation is almost a sure thing. I have some reservations but she will not change the balance of the court. I will be looking at how she rules on gay issues, can she be fair and rule according to the law?

she is a lesbian isn't she? that would tell you how she would vote on gay rights. i don't care about her private life but the voting i do care about. i think she is going to be confirmed but question the choice myself.

Bee, I don't know whether she is or isn't. We used to say that a person was married to his or her career -- and if there was more to it than that, polite people did not pry. I put an earlier comment up here (and took it down) that went beyond that. Part of me understands why there's such intense speculation on this point, what with gay marriage cases moving through the judicial system at various levels. But another part of me would rather be old fashioned and not inquire. If she is, given the level of scrutiny to which her life will now be subjected, she will almost certainly be 'outed' anyway. She has to realize this going into the process.