Sounds like a song you've heard before? Stay with me for just a moment, please. I believe I have something different to offer.

For those of us who wholly align with neither side, life is becoming increasingly uncomfortable. Since either side accepts, as an article of faith, that all those who are not with them -- 100%, four-square, solid with them -- are against them, a lot of us in the middle start to imagine that things must have been better in the past. I read a column in Newsweek recently that cited the U.S. Senate under Majority Leader Lyndon Johnson, as an example of a happier time when bipartisanship was not a curse word. The columnist even referred readers to Robert Caro's book on LBJ's tenure as Majority Leader, Master of the Senate. Good heavens! The body portrayed in that book is something that no one should want to emulate. Ever. If that assemblage can be held up as a positive example for today, the present is indeed bleak. 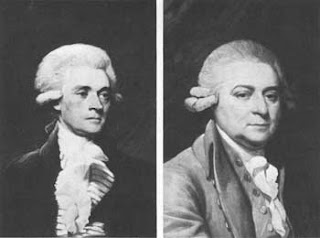 Messrs. Thomas Jefferson and John Adams collaborated successfully on the Declaration of Independence and in European diplomatic assignments, getting the infant America launched on the world stage. When Adams and Jefferson both resided in Paris, they were apparently warm friends. At their end of their long lives they engaged in a lively correspondence that largely healed the wounds that had destroyed their friendship.

But such wounds! Back in America, when they became political opponents, Jefferson encouraged (and found money to pay for) the most astounding attacks on Adams. Adams' vanity, his ambition -- even his sanity were challenged. He was accused of being a monarchist -- and that was one of the nicer charges leveled against him.

Adams had some choice words for Jefferson, too, although the most partisan attacks on what came to be the Federalist side came from Alexander Hamilton. (Adams cordially despised Hamilton as well.) If Adams usually limited his vitriol to his diary or to private letters... well, his "private" letters sometimes found their way into print.

Collected into contemporary biographies and histories, these attacks and counterattacks are often sickening to read. Not that every charge was necessarily false: Jefferson's alleged relationship with Sally Hemings was first made public by James T. Callender, one of the "journalists" that Jefferson and his friends had employed to slander Adams and the Federalists. Of course, Callender's charges were not leveled until after Jefferson had cut off his income. (Though probably true, the story of the Jefferson-Hemings liaison was so salacious that even Adams refused to believe them.)

Thus, the media has always been poisonous -- which you might think contradicts my thesis at the outset of this essay, blaming the media for our present degenerate political climate.

But Adams and Jefferson did not have to contend with Fox News or MSNBC or Daily Kos or Rush Limbaugh. No one confides only to their diary any more. Sarah Palin, for example, vents on a Facebook page. The 24/7 news cycle, the competition for ratings, and the money to be made from punditry have elevated Callender's heirs to fame and fortune. And no rumor, no charge, no accusation of villainy goes unreported... or unrebutted. Who among us would remain friendly with someone who Faces the Nation every Sunday morning and attacks us personally?

Thus, things are the same as they ever were -- only much, much more so: We know about every attack, every smear now -- instantly and constantly.

Some circumspection on the part of the political class would help. But that's probably far too much to hope for. I suppose the ultimate remedy lies in our hands. Fox News and Rush Limbaugh, on the one hand, and Keith Olbermann, MSNBC and the Daily Kos, on the other, succeed because people watch and listen. We should demand better.

I hope we will.
Posted by The Curmudgeon at 8:21 AM

Email ThisBlogThis!Share to TwitterShare to FacebookShare to Pinterest
Labels: History, Roadkill -- politics in the middle of the road, Technophobia

When I was a wee lad in parochial school, Sr. M. Magdalene told us a story about the Eschaton. At the Last Judgment it would be like they are showing a movie of your entire life, every good thing and every dirty little secret thing, to an assembled audience of everyone who ever existed in the history of the world. Surely we are witnessing that now. The world will end not with a bang, but with a tweet.

Sounds a bit like the movie Defending Your Life (although, in the movie, everyone on the world was reduced to a panel of three -- otherwise the cost of extras would have been prohibitive.

And I'm almost positive that Albert Brooks was not educated by nuns....

Whatever the problem, the media had something to do woth it.

I solved it for me - no TV or radio pundits of any stripe; and, I read pundits with great caution.

What 24/7 media and our leader's pandering to it has done to me lately is numb me. In all that time that needs to be filled, no one, the media or politicians, seem to be interested in disseminating facts and logic.

But, I suppose there's no real reason to, he/she said seems to work for all the players. Ratings are good and the the pols return to office for the most part.