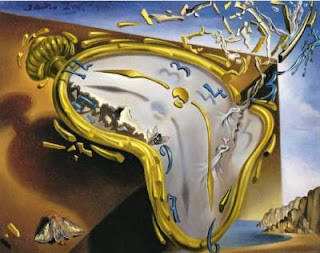 I suppose I can blame Bee for getting me started on this one.

My blogfriend Bee made an entirely innocuous remark the other day about looking forward to the return, this weekend, of Daylight Savings Time. I don't particularly care that it will be lighter later or darker earlier... although lately I've begun to appreciate the fact that it's less hazardous trudging across my bedroom floor in the mornings these days because the sky is starting to brighten now when my alarm clock goes off. Next week it will be pitch black again. But that will pass soon enough.

My real problem with Daylight Savings Time is that this weekend will be only 47 hours long.

I don't want to give up that hour.

It's no good telling me I'll get the hour back in the fall; I know that. I look forward to that. I think all weekends should be longer than 48 hours.

Many years ago I had a number of cases against a PI attorney who 'commuted' from Michigan. I never knew exactly where. He may have lived in Grand Beach or New Buffalo -- where many Chicagoans congregate during the summer months -- or he may have been further north. Wherever he was, he was not just a summer resident; he lived there full-time, keeping some sort of apartment here in the City for the three days a week that he came into the office.

That's right: He came in on Tuesdays, Wednesdays and Thursdays only and was not available for court or depositions on Monday or Friday.

No one ever forced him to do otherwise, though periodic efforts seem to have been made. He had an associate who came to court on Mondays or Fridays to beg postponements until a Tuesday, Wednesday or Thursday when The Man would be available. As far as I know, these requests were always granted. (None of the cases I had with him ever came to trial so I don't know if he made an exception for trials -- I wouldn't be surprised either way at the answer to that question.)

I didn't much care for this guy at the time -- he was a pain in the neck for several reasons, not all of which had to do with his unique scheduling -- but he certainly had a good idea about weekends. Ninety six hours seems about the right number to me -- long enough to rest from the rigors of the week just past, long enough to start work on some pending domestic project, long enough to become weary of said project and to look forward to the change of pace that work might bring... yes, I think this would be about ideal.

Sadly, I don't think it's possible today. Of course, I don't know how it was possible then.

But while the 96 hour weekend may not be realistic -- a 47 hour weekend strikes me as an abomination. It will get lighter in the evenings eventually at this latitude -- for a little while, anyway -- even without fiddling with the clocks.

Maybe if we moved the clocks forward on a Tuesday or something it wouldn't bother me as much.
Posted by The Curmudgeon at 9:36 AM

well i'll do you one better than that! i have an hour lobbed off my cruise!

This tidit about the time changing this weekend hadn't even made it to my radar yet and then I saw the title to your post and now I an all freaking out. Thank.You.Very.Much!
I didn't think I had enough time with the 48 hours for this coming weekend and now you took an hour away! ARGHHHH!!!!

What Christina said; and, for those of you not used to Curmudgeon not translating, a PI lawyer is a Plaintiff's personal injury lawyer who makes his or her living suing people, who are defended by their insurance companies, who employ Curmudgeon. Say thank you Curmudgeon.