What if the Baseball Writers decided entry into the Basketball Hall of Fame? 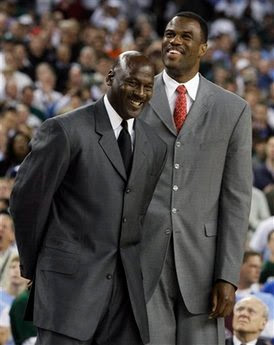 In one of the biggest non-surprises of recent memory, Michael Jordan (shown above with David Robinson Monday at the NCAA Championship game) has been elected to the Basketball Hall of Fame.

Obviously, the man who is perhaps the greatest basketball player of all time belongs in the Hall of Fame, right?

But... the news got me thinking... what if entry to Basketball's Hall of Fame were guarded by the Baseball Writers of America?

It is the baseball writers who decide, in the first instance, who may be enshrined in Cooperstown. Unless 75% of the writers with voting privileges agree, no one gets in... at least not until after their 15 years of eligibility are up and the veterans' committee, maybe, lets them in.

Now... Jordan had an anemic career .202 batting average during his one-year baseball sabbatical... but I'm not talking about that... not directly, at least, as shall be seen. But what it basketball writers had the same privileges and attitudes as the baseball writers?

Would Jordan have gotten in the Hall on the first ballot?

We take you now, via the miracle of imagination, to a meeting of entirely fictitious basketball writers, debating the Hall-worthyness of one Michael Jeffrey Jordan....

"Well, I never vote for anyone on the first ballot," says one, reaching for the tray of sandwiches in the middle of the table.

"Me neither," says another, daubing mayonnaise first off his chin and then off his tie.

"C'mon fellas," says a third (the group is almost exclusively male), "if Jordan doesn't get in first ballot, who does?"

"We have a responsibility," says a fourth, and at that several of the assembled writers put down their malted beverages and nod gravely in assent.

"You're not suggesting... steroids, are you, McGuffy?"

"No," says the fourth speaker, now positively identified, "not that. Of course, Jose Canseco wore spikes, not sneakers, so we'll never know for sure." More nods. "But there were rumors of other problems."

"Gambling," says a round-faced man with a bad comb-over. "He gambles like crazy. Golf, casinos, you name it."

"Yes," said McGuffy, "gambling. And did he really leave basketball to play baseball for a year because he had a burning desire to try to make it in that sport, too, or because it was a plea bargain with the Commissioner's office?"

"What are you saying?" asks Comb-Over.

"Just this," says McGuffy, "there was talk at the time that Jordan was under investigation for betting things besides golf."

"Pete Rose," someone wheezes, and the more religious among them cross themselves. Two other guys reach for the last sandwich at the same time.

"Maybe he was suspended for a year," suggests McGuffy, "only the Commissioner didn't have to announce it because the Bulls found him a good excuse."

"Could be," says another.

"Well, I'm voting for him anyway. He's the greatest basketball player ever born."

"I never vote for anyone on the first ballot," says the first person who spoke when we joined this little meeting, repeating himself, and not for the first time.

And so it was that Michael Jeffrey Jordan, arguably the world's greatest basketball player, was denied entry into the Basketball Hall of Fame, receiving only 63% of the necessary 75% required for admission.

"Probably next year," offered one writer in response to the outraged public.

"If nothing surfaces in the meantime," said another.
Posted by The Curmudgeon at 5:30 PM

I'm too lazy to research it; but, I'd like to know if there's a moral component to election to the Hall.

It's not like Jordan was the all time hits leader.

Moral component? Don't tell the writers who elected Ty Cobb to the hall. What about Ferguson Jenkins? Didn't he get caught with drugs one time?

Or the Pro Football hall of fame. Isn't there someone there who was all but convicted of double murder?

I think both Shoeless Joe Jackson and Pete Rose belong in the baseball hall of fame.

I don't know anything about major league baseball. Except for fans it would be MAJOR LEAGUE BASEBALL.

I did however see on the news that Sen. Kennedy through the ball to open a game somewhere.

I don't know if you lurk at my blog or not.. but I thought you might get a chuckle from http://www.skittlesplace.net/2009/04/i-amuse-myself.html

Yeah that was a bit of spam. Please don't turn your word verification back on. I promise not to do it again.